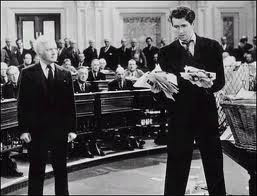 Mr. Smith kommer til Washington
Another title for this movie could be ”Mr. Deeds goes to town, part 2”. This is in quite a few ways a remake of the earlier hit movie and as is custom it is poorer than the original.


It is the same director (Frank Capra), same female lead (Jean Arthur), same formula (a goodhearted but naïve fellow goes to the big city and gets steamrolled by the evil city dwellers, yet bounce back because of his integrity), it even ends with a major speech to turn the tide. The primary differences are the male lead (James Stewart instead of Gary Cooper) and that political power replaces economic power, though in many ways it adds up to the same thing.


If it had not been for “Mr. Deeds” I would probably have liked “Mr. Smith” better, it just tastes too much of milking a success formula especially when it does not entirely match up to the original recipe.


In the following I will be revealing essential parts of the plot so if you do not want to get the experience spoiled, stop reading here.


For those of you who continue and have not seen the movie I am not saying too much by revealing that it’s a happy ending. This sort of movie has to have a happy ending. It is Frank Capra for crying out load. It is the way it comes about it that is the surprise, simply because it is so unlikely and artificial that I had to think it over a few times.


This is a very patriotic movie. If you are of the kind who thought it is a little over the top when we see the American flag at the end of “Independence Day” you will definitely get your hat full with this one. The object is however to make the viewer aware of what they have and what is at stake when greedy and corrupt men take the tools of power away from the common citizen. Mr. Jefferson Smith is the common citizen, the representative of the people (although I did not see him get elected, well, just a detail) who sees the legislative system as the finest tool to protect all those American values.


That same legislative system is however deeply entangled in corruption and realpolitik. Mr. Smith is chosen as a replacement for a dead senator because it is assumed that he will be easy to control. He is a leader of boy rangers and that is very symbolic, he does not have any vices what so ever. He has hardly arrived in Washington before his unorthodox ways borne out of sheer inexperience becomes the laughingstock of the establishment, much like Mr. Deeds. Where Mr. Deeds had a world-wise journalist (Jean Arthur) who were at first opposing him, then supporting him in the big city, Mr. Smith has Clarissa Saunders (Jean Arthur) the world-wise assistant, who first throw him to the wolves, then tries to save him. Deeds was brought to town by lawyers who wanted to exploit him. Smith is brought to town by Senator Paine, his childhood ideal and friend of his father, who, deeply entangled in a real estate scam, seeks to use him.


The details of the scam are a bit blurry. Something about a dike on some property secretly bought up by a small group of tycoons who stand to make a fortune out of the dike if the Senate passes the bill granting it. The ringleader is a nasty fellow named Taylor. He is the state’s own Berlusconi in the way that he controls everything: politicians, media, factories, electorate, you name it. And Paine is the one who is taking the Bill through Senate.


Unfortunately Smith starts asking questions. His own suggestion to create a national boy ranger camp on the same piece of property makes him the target of the Taylor machine. First through intimidation. Being an honest fellow Smith does not stand for intimidation. Then Paine heads a direct attack on Smith. He is, claims Paine with righteous anger burning in his voice, a fraud and a disgrace on the Senate. He it is who has bought property in the valley and is running a scam to cheat the public.


Smith is stunned. In the ensuing congressional hearing the Taylor machine has constructed a bullet proof case against him. He is done for. This is where the movie intensifies. Up till this point even James Stewart has had difficulty making the movie really interesting. With this case, the equivalent of the sanity charge in “Mr. Deeds”, the movie put on some steam.


Unfortunately it is also where it gets a bit weird. Saunders and Smith device a comeback. On the day Smith is to be discharged from the Senate he is to take the floor and keep it indefinitely by using a special American institution that gives a politician the means to talk his fellow senators or himself to death. The object is to keep going so long that his story reaches the public of his state and they can throw their support at him. But the opposition is too massive. Taylor controls everything. Not a word reaches the public, instead they are told what a bad guy Smith is and are incited against him. His only means are a boy ranger press and a bunch of kids and they are hopelessly inadequate. I find this race for public sympathy a bit odd and fail to see the point. He is losing it anyway, so his last straw is to appeal to his Nemesis, Senator Paine, and it works.


After throwing everything on this charge, his personal credibility and political future as well as his supporters he suddenly changes his mind at the moment where he has won.


So, the message if I understand it right is that the system does not work, that the Taylors can hijack the political process and only the decency of the perpetrators themselves stands between civilization and anarchy.


Maybe I am missing something.
Posted by TSorensen at 22:25