Movies on a Plane 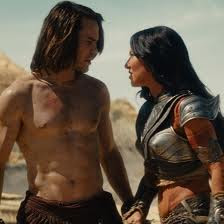 Movies on a Plane: John Carter
In this post I am breaking my form. This has nothing to do with the 1001-movies-to-see-before-you-die list. Instead I want to share with you my experience from watching movies on a plane.


I have just arrived in Brazil on a job and that is an awful long flight from Europe (13 hours to be precise). There is really not much to do on a plane except for reading, eating and watching the movies the airline offers. Unless you are flying a super cool airline like Cathay Pacific the list of movie could be rather limited and you find yourself watching movies you might not otherwise have been watching. I saw Men in Black III, which was a bit disappointing, Brave, which is a nice if predictable family cartoon and John Carter which is the movie that made me write this post.


I actually like watching movies I have never heard of and thus have no expectations for. Those are the movies that often give me the best impressions. But sometimes the reason I never heard of it is because it is really awful. This is one of those cases. Normally that would not make me write a post on it, but this is so bad it was actually funny.


The movie starts by telling us that Mars is not a sterile planet, but quite livable though dying and currently inhabited by some people fighting a war. Then we see some aircrafts straight out of Star Wars manned by crews resembling pirates/gladiators/romans, well something in between, shooting laser beams and boarding each other in old school pirate style. The movie was not two minutes in and I was already considering switching to another movie.


There is a principle that the quality of a movie is inversely proportional with the breast size of the women, but quite proportional with the amount of cloth they wear. Following that principle “John Carter” is in the extreme low end. While the men are consistently sweating muscular warrior types there is a disproportionally large amount of gladiator women including the female lead, who incidentally later on changes to an even skimpier outfit that makes Princess Lea look overdressed at the sandpit. Add to that a male lead that does not make a lot of sense but act with the bravado of Ash in Evil Dead: Army of Darkness and I think you get the picture.


Speaking of Army of Darkness (which happens to be high on my list) “John Carter” really borrows a lot from it. Ash in Star Wars and throw the logic in the bin and there you have it.


So, John Carter starts out, in 1881, by sending a telegram and a young fellow shows up at his mansion. John Carter has died and the young man is given his diary to read, which is the story of the movie.


That story begins in 1868. John Carter, a cavalry man from Virginia is roaming the frontier hunting a gold treasure. He is an anarchist who breaks out of any prison and hunted by both the cavalry and a group of Apaches he hides in a cave with strange drawings. Toughing them summons a strange person that tries to kill him. John shoots first and grasps a mysterious medallion, which sends him to Mars.


On Mars John Carter is the incarnation of Superman. Courtesy of the low gravity John can jump 100 m high (at least) and swing around big boulders. Obviously the producers confuse gravity and mass. A 100 kg boulder still has the mass and inertia of 100 kg even if the gravity is only a third of Earths.


Immediately upon arrival John Carter sets off the hatching of babies of an alien species and is apprehended by the adult representatives of same. Their leader takes an unexplained interest in him and remains, no matter how hostile John Carter behaves, his protector. The aliens are green, tall and sporting 4 arms. Yeah! John has no clue what they are saying but then he drinks some fluid and they are all speaking English. That is even better than Antonio Banderas in “13th Warrior”, where he sits around the Viking’s bonfire until he suddenly speaks their language. These aliens live in a medieval society with guns carrying some resemblance to the Sand people of Star Wars. John Carter will later single handedly kill several hundred of them with a sword, but they still like him especially after he kills two giant apes in a gladiator arena with a chain. Again taken straight out of Star Wars.


When some planes appear with the traditional pirate boarding scene John jumps up, trashes the planes and saves a girl, who later turns out to be the princess. She is betrothed to a warlord from the competing town and has run away from home. She is also the übersexy heroine who compensates for mediocre acting skills with a voluptuous body.


The rest of the story from this point on is so obvious that I do not even have to elaborate. It is so cliché it is funny. John has been hurt when he lost his wife so he is reluctant to the girl but overcome it. She promises to help him go home but also really could use his super powers to crush the enemy and the enemy of course is controlled by super villains who like Agent Smith can appear out of nothing and defy all natural laws. Though for Carter that is no problem, he knows a lot of tricks. We even get the final moment of the wedding cliché, you know, that most dangerous moment just before the final yes where the wedding is always interrupted. If you want to get married you better hurry through that part.


Nothing really makes sense in this movie, the heroes are super smart, yet do really idiotic things and you can guess the story after 30 minutes. Yet it is so thorough about it that it becomes entertaining. I laughed a lot from all this. The lame one-liners, the psedo-science, the super human achievements and the shear wackiness of it all. And then it is actually based on a novel if you believe it.