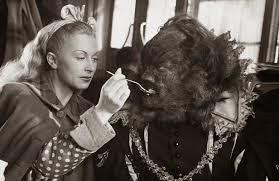 Skønheden og Udyret
The fairytale/fantasy genre is not that well represented on the List. Probably because it is not considered highbrow enough and frankly much of it does rate as pulp. On the other hand almost all cinema has a level fiction to it, even documentaries cannot entirely escape this. It is merely a matter of volume. Fairytales and fantasy stories set the fiction volume very high, usually by introducing a number of fantastic elements and up to this point (1946) I can only think of a handful of films on the list that fit this category, “The Thief of Bagdad” and “The Adventures of Robin Hood” spring to mind plus the animated films included on the list.

As a viewer we know that different rules apply for this type of films. The fantastic element will usually defy science and common sense to an extent that most people will shrug and shake their head if these elements were suggested in reality, but a modern audience is quite used to people who can fly, read minds or make things disappear as long as it happens in film. Even aliens, vampires or monsters in general are fully acceptable in a film context. Modern stories and movies in the fantasy genre are acceptable to the viewer because except for the fantastical element they will as a rule comply with all other rules. They are standard stories with a twist.

Fairy tales however are not standard stories. Well, in a sense being part of an oral tradition they are usually older than most stories, but what I mean is that they do not have to comply with any rules and can therefore be more difficult to watch. Most notably they do not need to adhere to any inner logic. Cause and effect is often suspended and we do not have to accept the story as any kind of reality, even in some weird parallel world. Instead the fairytale is a fable that is supposed to tell us a moral lesson. For a modern viewer used to fantasy fairytales can be quite a mouthful.

The reason for this lengthy introduction is that this is exactly what “La Belle et la Bête” is.

“La Belle et la Bête” is a story probably more known in its Disney incarnation as “The Beauty and the Beast”. Shockingly as it may seem I actually never saw that version in its entirety, but the story itself is a classic, authentic fairy tale. A man (Marcel André) is captured by a princely beast (Jean Marais) in the forest for picking a rose. He is released on the condition that he submits a daughter to this beast. The girl, Belle or Beauty (Josette Day), then becomes a prisoner of the Beast. The Beast is however a magical creature. He needs a girl to love him to transform from beast to prince and so he does all in his power to charm the girl.

Beneath this fantastic framework it is a story about seeing through appearance to what lies beneath, about greed, whether for fame, love or earthly wealth and about integrity and probably a few motives that I did not catch. It is like any fairytale essentially a moral lesson.

Having established the framework of this film it may come as no surprise that there is a surreal quality to this production. Jean Cocteau had a background in the surrealist milieu of France in the thirties and the parts I have seen of earlier works have that same quality. Here in “La Belle et la Bête” he has a perfect excuse to perfect this style. Most notably in the castle of the beast. Here he combines normal, recognizable images of walls, rooms, woods with surreal, magical images of torches held by living human arms protruding from the wall and statues with living facing whose eyes disturbingly follow the character passing by. The castle is clearly haunted, there is a sadness to it, mildly frightening, but most of all there is a dreamy quality that makes you feel that you have stepped into the subconscious. When Belle maneuvers in this castle she does so as if sleepwalking, not so much frightened as fascinated. There is of course a deeper motive for that, though at the moment it eludes me. Is Belle on some sort of inner journey? There is a direct line from “La Belle et la Bête” to Guillermo del Toro’s “Pans Labyrinth” (“El laberinto del fauno”).

At the center of the dream castle is the beast itself. He is in his own right a triumph for the costume and make-up department. Forget about the Wolfman and Frankenstein. The Beast is convincing and menacing. You can almost hear him growl.  He looks like a science experiment gone wrong, mixing human, wolf and bear. This achievement is however dented when he speaks. It may just me, but I cannot help smiling when he exclaims “Alors…” en emphatic French.

All characters in “La Belle et la Bête” are one-dimensional caricatures. The mean sisters are ultra vain, ultra shallow and ultra petty. The brother is conniving and his friend Avenant is very impressed with himself and his heroism. He proclaims his love for Belle, but he cares not for Belle, only himself. He wants the wealth of the Beast the easy way, since he does not care to actually earn it and he wants glory for himself. Curiously both the Beast and Avenant are played by Jean Marais.

And Belle herself, she is the good girl, the Cinderella, forced to be under foot by her sisters and the one who sacrifices herself for her father. You might then think that this epitome of goodness will immediately take a liking to the Beast and thus break the spell, but not so. No way she will love him. Instead she loves the bozo Avenant. But she can feel pity for the Beast and that is almost worse. Then again isolating a girl with nothing to do but dressing up in finery may also woe the wrong type of girl for the Beast. I am not sure he really wants a girl he can buy with diamonds.

I do not really mind that characters are flat and that there is a certain lack of logic to the story. That goes with the territory when it comes to fairy tales. Yet the ending baffles me (WARNING OF SPOILER). Belle’s sisters, brother and lover are all united in a mission to slay the prince and gain his wealth. I understand their selfish motives and their mission takes up a significant part of the ending. There is suspense here; what will they do to the Beast and will he and Belle be able to stop them and perhaps punish them to their transgressions? Avenant finds the sacred treasure house, force his way in and is shoot by a guardian statue. Immediately the Beast turns into a prince with the face of Avenant while Avenant turns into a beast.

Okay, Avenant is the real beast and is revealed as such, I get that, but still it is a bit of a fizzle. What of the brother and the sisters? What of the Beast’s own transformation, is that because of Belle’s love/tears? Or is it triggered by Avenant’s transformation? In the case of the latter maybe the role as a beast is simply something that takes turns as the coachman in “Körkarlen” and it puts a question mark on the Beast himself. What did he do to become a beast if it serves as punishment for bad transgressions?

These are some of the causalities that the film breaks with the excuse of being a fairy tale. I am not so used to this sort of violations so I am looking for an explanation and hope there is one.

And Belle, does she love the new prince? Well, it seems so, but is it because he now has the face of Avenant and if so what does it say about her?  According to the Book Greta Garbo famously exclaimed that she wanted back the beast. I tend to agree. He was my favorite part too and I preferred him to the prince.