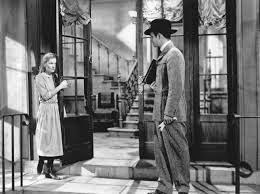 Brev Fra en Ukendt Kvinde
”Letter From an Unknown Woman” is touted as a masterpiece by the Book. Technically it is quite okay, but I hated the story and the characters with a vengeance.

Let me explain this right away (and warn of spoilers right away). This is essentially a film about a stalker. A female stalker, but a stalker nonetheless. Joan Fontaine is Lisa Berndle, a woman who all her life has been madly in love with a famous pianist, Stefan Brand (Louis Jourdan), who happens to live in the same building. It is the kind of love I think most people experience at some point during their adolescence, the remote adoration of someone unachievable. Like the love for an idol or image or older student who would never look in your direction under normal circumstances. That much is fine. I understand that.

The problem here is that Lisa lets this infatuation totally dominate her life. Like most psychoses an element that is common in normal people has grown out of control and that is why I consider Lisa not a romantic star-struck dreamer, but a psychotic woman. In our day and age she would get a restraining order or get locked up for some treatment.

I am okay with her childhood romance. That is almost normal and even sweet. She stands under the pianist window and listens to his music and dreams that the music is for her. She is overstepping herself when she invades his home, but even that can be excused. She is young and this is the kind of thing silly young people do and we love them for it (sometimes).

My problem with Lisa stems from two episodes, or chapters of her life. The first is from the moment she returns from Linz to Vienna and arrange her entire life around Stefan Brand. Mind you, he has no clue who she is and that she is even around. When they finally meet (because they do) Stefan treats her like on a first date, while she is like a fangirl who knows more about her “victim” than he does. To her credit she chooses to be discreet and mysterious and that was probably the smarter route. Had she blurted out her state of mind he would likely have called the police. Of course she attach a lot more significance to this date than he does, so he just moves on while she nurtures her devotion in the one thing Stefan gave her, a child (named Stefan of course).

As the next chapter opens you would almost think that she has recovered her senses. Little Stefan is 9 years old and an adorable boy. Lisa has married the soldier she once dated and left. He loves her, she loves him and their life together is one of comfort. In fact you would think all turned out well. But no. On the whim of a chance meeting with the now older Stefan Brand Lisa decides to throw it all away. Husband, son, comfortable life, even herself eventually, to throw herself at Stefan Brand. Not a decision she makes on the spot, but careful deliberation brings her to the conclusion that this is what she must do. Only to find out that to Stefan Brand the older Lisa is just another pretty woman with no connection to the earlier encounter and that all the meaning she gave their brief encounter was all in her mind. But then it is too late. Gone is everything, literally.

The ironical thing is that Stefan Brand is not at all worthy of all this attention. He is in a word a scumbag. He is a talented artist (like all such idols) but undisciplined and superficial. He is all words and charm and absolutely no commitment. His declining musical career has nothing to do with a romantic longing for a mysterious girl, but all to do with an unhealthy and idle lifestyle.

Now, I will admit that there is some potential of an interesting drama in a story of a stalker and a hedonist, but for me all is ruined by the intention of the movie. It seems to me that the movie wants us to root for this girl. We are to think that it is so romantic, that she is willing to sacrifice everything for this man and that he is a fool not to reach out for her. Goddammit she is a psychopath! Ruining people’s lives for a dream no more real than the Easter Bunny. I cannot forgive her to give up on a loving and caring husband who will do anything for her and is taking in her son as his own, well knowing that he is the lovechild that could never be his. And more importantly she has no care for her beautiful son who has finally found a home and a father and instead tosses him into the unknown. That he as an indirect result dies from typhus is not really her fault, but the fact is that it would not have happened if she could just have controlled those crazy feelings.

I do not really give a shit for Lisa and Stefan senior, but I care for her husband and son as her victims and I am angry with her and more importantly the director for telling us that in the name of romantic love such casualties are acceptable. That is stupid nonsense and I will not have it.

On the technical side I quite liked how they have tried to recreate Vienna around year 1900. Max Ophüls would have known Vienna quite well as he used to live there before the war. Of course it is odd with everybody speaking English with varying accents in Vienna, but that is not unusual for this sort of films. The music is nice and elegant and on the technical side my only complaint is that Joan Fontaine is playing Lisa in all her life stages. That works well in her older incarnations, but to see this 30-something woman playing a 12 year old girl is just creepy. The extra-material explains this as Lisa placing herself in her younger body, but I am not buying it. They actively tried to make her 12 years old and failed. To me it seems like they wrongly thought this would be preferable to having a younger actress playing Lisa-as-a-child.

Anyway, this movie disgusted me and I hope I will not have to see it again. Done.