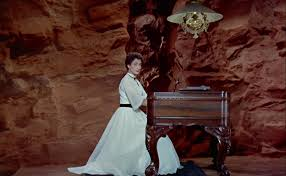 It is a new year, 1954, and another stack of interesting movies. The first of the year is “Johnny Guitar”, a Nicholas Ray film starring Joan Crawford and Sterling Hayden.

“Johnny Guitar” has been labelled the strangest western around (by the Book) and Martin Scorsese (of course) says in the introduction to the movie that it made people confused and was not well liked in America although in Europe critics were excited about it. All this made me very curious and I was wondering what was so special about this movie. A movie that according to Scorsese would look and feel like a western, but was not.

I am still confused by those statements because I really liked the movie and found the story fairly straight forward. Even the allegory is pretty obvious. Why would this movie not click with the audience?

There are similarities to “Shane” in the conflict between the old frontier west and the new civilized west. Joan Crawford’s Vienna has built a saloon in the middle of nowhere in anticipation of the railroad and the influx of newcomers. She is the new west, but ahead of its time, which is about to become crucial. The land is run by the old west and they despise the new west and see Vienna as its proxy. The old west is led by Emma Small (Mercedes McCambridge), a crusader as there ever was one who sees Vienna as poison and with a life goal to eradicate her.

Instead of Shane Vienna has called in her old flame Johnny Guitar (Sterling Hayden), a reformed gunslinger who was infamous under the name Johnny Logan. Where Shane resigned to fight fire with fire, Johnny has to curb himself as Vienna insists she wants no killing and this is also more or less where the similarities to “Shane” ends. Instead this movie has a lot more in common with “The Ox-bow Incident”. The old west get stirred up into a frenzy when the bank is robbed and the resulting pose is directed by Emma towards Vienna. We know she is innocent but the pose needs somebody to hang and is beyond reason. When the Marshall tries to calm things down Emma quickly takes him out and then there is no restraint.

Vienna has been associating with the bank robbers, a gang led by “The Dancin Kid” who is also a thorn in the eye of Emma and her cronies, but she has nothing to do with the robberies. Still she prefer robbers to killers and robbers or not, they do not deserve to die.

The films ends with a famous showdown between Vienna and Emma, and although Vienna and Johnny can walk away alive they are by no means winners. Emma burned down Vienna’s life work, the saloon and their future is uncertain, but they are alive.

The allegory is as I mentioned above pretty obvious. This is a critique of the McCarthy witch hunt, which at this time had been running rampant for a few years. Emma, who looks and sounds nothing so much as a small yapping dog running with the big dogs, is the senator himself on some vindictive crusade against representatives of a new world he cannot accept. That the “Un-American Activities” here is to be a “fallen” woman building up her own business and refusing to kill is an irony all on its own. The infamous hearings are here compared to a pose gone out of control. Without Emma the steam goes out of the pose and some sense creeps back in, again pointing a finger at McCarthy.

There is also a grading of crime here. Yes, robbing a bank is no good, but killing is worse and that is easily compared to the “crimes” of McCarty’s victims and his bloodlust. The ending as well has an allegory in the blacklisting. Even those “survived” the prosecution might come out ruined.

This was a bold movie to make and I am frankly surprised Ray got away with it. Either the committee was dumb as a door or they were ashamed enough to let it pass. It is certainly easy enough to see for what it is and that brings me to the opening question: What is it that makes this movie strange and difficult to understand? Is it just because 60 years have passed and what was obscure then has become obvious now? I mean, we already had “The Ox-Bow Incident” giving us the same theme and none of the themes in the movie are exactly new, except maybe for having two strong women fight it out and that is almost besides the point.

I liked this movie a lot. Mostly for the dynamics of the movie and the interesting allegory, but also the filming is awesome. The colors are interesting and the location shots are just beautiful. I am not a huge fan of Joan Crawford, something that may be colored by her real persona reputation for being a monster, and here her acting feels stylized. She is proclaiming a lot and posing and although I have a feeling she was directed this way it does not feel right. Ray wants her to be a martyr and he succeeds at that, but it makes her odd. At the other end of the spectrum we have Ernest Borgnine as Bart Lonergan. He is just awesome as a scumbag. I hope to see a lot of him in the time to come.

Thumbs up from me on this one. Another hit from Nicholas Ray and he is quickly becoming a star director with me.
Posted by TSorensen at 00:08