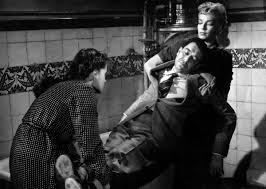 A French horror movie from 1954. That sounds like enough of an oddity to make it interesting and I bet that is a very small sub-genre of film. Add to that that this particular film, “Les Diaboliques”, allegedly challenged Hitchcock into making “Psyco” and I am starting to become really interested. Oh, and the director created the sublime suspense of driving explosives across a dangerous mountain in “Wages of Fear”. Now I almost cannot wait. This just have to be good.

Mostly my anticipation was rewarded but only mostly. Some things worked less than great and I think that a comparison to Hitchcock is a bit of a stretch. That is mainly because some elements do not hold up as well today as they did in 54 whereas Hitchcock’s best movies has not aged a day.

Yet, what Clouzot, the aforementioned director (and producer and writer), does well he does really well and that is the suspense of looming disaster. If you have a hard time getting through the initial part, just hang on. The last 15 minutes are sublime.

The setup is actually interesting all on its own. Christina and Michel Delassalle own and manage a boarding school somewhere in France. Christina (Vera Clouzot) is originally from South America where she may have been a nun and the funds to start the school came from her. Michel (Paul Meurisse) brought her back to France and is acting as headmaster of the school. Michel is a sadistic tyrant and Christina is suffering from some heart disease that makes her weak and she has apparently been just about to die for a few years.

The third person is Michel’s mistress, Nicole Horner (Simone Signoret) who is a teacher at the school. Nicole and Christina are friends and united in their hatred for their sadistic and brutal master. We learn that a revolt has been stewing for some time and now the two women are ready to take action. They execute an elaborate plan where they lure Michel out of town to a place owned by Nicole where they sedate Michel, drown him and take him back to the school in a whicker basket. There they dump him in the overgrown pool. A few days later however the pool is emptied and the body is gone. Then the two women are getting hints that Michel or his ghost is still around. The children see him, he is staring out of a window when a group photo is taken and he sends dry cleaning back to the school. WTF! This, together with a growing sense of guilt, especially in the religious Christina, is driving the two women crazy and they start arguing to the extent that Christina kicks Nicole out if the school. Christina herself is growing more and more frantic and paranoid and the last 20 minutes of the movie is pure torture for her.

I like this idea of the wife and mistress ganging up on the evil husband and lover. I sort of understand Christina’s motive, living under the thumb of this bastard and unable to get a divorce because he has to consent besides the religious constraint on her. She has to strike back somehow. Nicole’s motive is more obscure. Michel is treating her just as bad as his wife, but since they are not married she could just walk away. We have to believe that she simply wants to get back on her tormentor and that only works half way for me.

The scenery is great, absolutely fantastic actually. The school look horrible, the kind of place you would hate to send your children and as a site for something evil and mysterious it is just perfect. I also love all those shots of townscapes and the small Citroën van. There is something very French about it. Charming and menacing at the same time.

The other excellent element I have to mention (again) is the suspense near the end and that is largely due to Vera Clouzot. Throughout the buildup phase she is balancing on a knife’s edge of a believable portray of a desperate woman haunted by doubt and overdoing it and losing that believability. Her state of mind is so frail that she is just about the worst conspirator to a murder, yet in that scene in the apartment with Michel tyrannizing her we see her make up her mind and that explains a lot. It is in the conclusion however that she really pulls through. Her nervousness gets perfectly translated to us that we also wonder what is haunting this school and her night walk through the corridors is just nerve wracking. First class suspense and it is her as much as direction and scenography.

On the negative side the buildup is just a trifle too slow for a modern viewer. This is a horror movie and the horror only really starts with half an hour to go and only in the last 15 minutes we are really getting our money’s worth. But then again, in 54 that would probably have worked fine. Hitchcock did many movies with very long buildups. The chock effects may also seem a bit lame for a modern viewer, we are just too jaded for this sort of thing. I liked the movie better when we did not know what was going on, before the big reveal.

The biggest problem however, and the reason I do not scream masterpiece here, is the detective Alfred Fichet (Charles Vanel). He is sort of imposing himself on Christina as some sort of 1954 Colombo and has the uncanny ability to show up bizarrely at the most inopportune moments. What are the odds he would be there in the end? Why on Earth is he sitting in Christina’s bedroom starring at her? I think I can say without spoiling too much that there is no Mr. Delassalle ghost on the school, but Alfred Fichet is a little too good at being at the right place at the right time.

There are two explanations here. One is that he is necessary for the resolution of the story and his actions are therefore forced. If this is the case it detracts from the movie in my book. I just do not buy it.

The second explanation is that there is something supernatural about him. That he is a product of Christina’s doubts and religious beliefs and that he is there to defend and vindicate her. The more I think about it the better it sounds, but it could also just be me wanting to find excuses to in something that looks like a clumsy script.

I doubt a modern viewer will go sleepless over this movie, in fact parts of it may help you getting some sleep, but there is no denying that when it is good, it is really good. A bit like with “Wages of Fear” really.