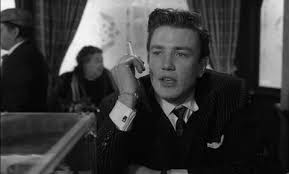 Lørdag aften søndag morgen
Back in the nineties I watched a number of British comedies that had that in common that they were all based in the British working class. Billy Elliot, Brassed Off, The Full Monty and Trainspotting to mention a few of them. They were quite enjoyable, at least I thought so, and I would gladly go to the cinema to watch them. These movies all hark back to “Saturday Night and Sunday Morning” as the movie that introduced the working class in British cinema.


In its day “Saturday Night and Sunday Morning” was quite revolutionary. I get the impression that British film until this point had little interest in what happened outside middle class and upper class circles, which considering the vastness of working class population was a bit of an oversight. “Saturday Night and Sunday Morning” changed that practically overnight with provincial characters from the industrial hubs who spoke the local dialect and did not give a flying fart for the concerns of rich people. As such this movie has a lot of significance, but unfortunately it has not aged very well. Compared to its modern equivalents it lacks the comic levity that makes the harsher messages go down and the protagonist is from our modern point of view not likeable enough for us to root for him. The result is a movie that flounders and fail to engage me as much as it is obviously intended.


Central to the movie is Arthur Seaton (Albert Finney). He works at a factory in Nottingham and has only one concern in his life: To enjoy himself as much as possible. In fact his entire existence centers on that objective. The job is the means to it and the girls are the targets that bring him that gratification. He is way to self-centered to be concerned with other people and would mock or harass then without a flinch if it would make him laugh. Much of his escapades takes place over the weekends, hence the name of the move, though are not restricted to it.


Arthur is having an affair with the wife (Rachel Roberts as Brenda) of one of his colleagues at the factory, a nice fellow who Arthur actually likes. Arthur and Brenda does a lot of illicit humping (another first for British cinema!), but that does not stop Arthur for hitting on other girls. One day he meets Doreen (Shirley Anne Field) and he moves straight into action. Doreen is way above his level, not economically, but in terms of integrity and sheer human quality and should by all rights be unattainable for a scumbag like Arthur. Yet Doreen gets charmed and they start a relationship in parallel to his relationship with Brenda.


Then two things happen. Brenda gets pregnant with Arthurs child and Doreen would like to get their relationship more into the open. The seriousness of both hits Arthur like a hammer. To his credit he obliges both, helps Brenda with support to get an abortion (which she eventually does not go through with) and he gets serious with Doreen. The consequence is that he gets caught in his double game. In the dramatic scenes at the fair I am so certain that his entire world will come crashing down spectacularly, but the only thing that really happens is that he gets beaten up by the friends of Brenda’s husband. The rest is handled by some well-placed lies. Doreen seem not to mind, Brenda is out of his life and even her husband is happy to let it pass.


To watch a guy who is essentially an asshole get off so easy is frankly disappointing, not to mention that the climactic scenes actually fizzle. I had expected things to get a lot worse. The real penalty for Arthur seems to be that Doreen has tamed him and let him into a life of home and marriage and some degree of respectability, the antithesis of his previous prerogatives.


If Arthur had been funny or at least his pranks had been fun rather than mean and egoistic this could have been an enjoyable movie in line with its counterparts thirty years later. Instead I get increasingly irritated by Arthur’s irresponsibility and also maybe I also feel it is a bit unfair that he gets a nice girl like Doreen considering that he absolutely does not deserve her. The world is not fair, but it is annoying to be reminded of it.


I admit it is refreshing to see a different population segment than the usual, but that would probably be more appreciated by a local audience, not to mention an audience in 1960, where such things were very unusual. The same goes for youth rebellion. It is a timeless theme, but more of a novelty in 1960.


All in all this is a movie whose quality is its significance in movie history, for what it set in motion, but not for what it brings an audience today. Everything interesting here really relates to the historic aspect. And then of course Doreen. She is a surprisingly pretty girl.
Posted by TSorensen at 00:08