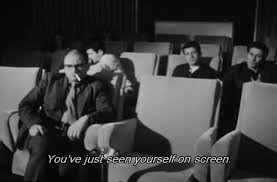 Fortællingen om en sommer
You know those classic photos of friends and family where everybody smiles and poses for the camera. I always found them less than satisfying. They represent an edited version of reality, not how the situation really is, but how the subject of the photos wants to appear. Instead I prefer to make my photos without people being aware of it to get a much more natural and real picture. My subjects usually complain that they do not look right, but to me they do. They also complain what I sabotage group photos. If the situation is not real anyway, why not take into a fun direction. There is no way I am going to look pretty anyway.


It turns out I am not the only one who like to photograph the real world. Today’s movie “Chronique d’un été (Chronicle of a Summer)” is so obsessed with that subject that that is all it really is: an almost desperate, yet futile, attempt at capturing reality, or more precisely truth, on film.


Given my own preference for photography of reality I should be excited, but “Chronicle of a Summer” does not manage to get me there. The problem in short is that it is too intellectualized and too impressed with itself and certainly way to meta for my taste. Still, I admire the attempt.


“Chronicle of a Summer” is a project by documentarist Jean Rouch and sociologist Edgar Morin. The articulated purpose is to make a portrait of reality of one summer, but beyond that it is a bit diffuse. The question of what is reality and truth is a philosophical one and this is a discussion the movie struggles with throughout. How to make a cinéma vérité, film of reality, becomes a topic of its own. In that sense this also becomes a movie about making a movie to the extent that we actually see Rouch and Morin discuss how to make the movie and what they want to achieve with it. Very meta.


Okay, so what they do is that they send two girls out in town to ask random people if they are happy. This, of course, triggers some amusing reactions. How would you feel if somebody on the street put a microphone in your face and asked you if you are happy? In any case as far as I could see nothing really came out of that.


Then they setup discussion groups where young people discuss politics, work and relationships. The intention is to make it authentic, but it sounds anything but. Unless of course these people are highly intellectualized and philosophical. It is the kind of pretentious discussions I could not imagine anybody have unless they were filmed or coached. Then, really, what happened to reality?


The movie has a meandering style, weaving in and out of topics seemingly at random. This means that it always feels out of focus. There are interesting points like Marceline talking about being with her father in a concentration camp or realizing in St. Tropez that the bikini has arrived (goodbye fifties…), but often the small stories are so out of context that I cannot fully get into them. The only thing that ties it all together is this declared aim of finding the truth of being in France in the summer of 1960.


I admit that it is interesting to get a peek behind the camera and it is when we truly get that peek that extra material gets valuable, but “Chronicle of a Summer” has already anticipated it and invites us into the film making process. Probably the aim is honesty, to take away every reason for us to think that this is merely acting, but it is disturbing and it actually does highlight that this cannot all be truth.  In fact all these people are very much aware of being filmed and to some extent they are instructed. This is not a hidden camera telling us what is really happening.


And then of course after all this discussion of truth and reality, what truth is it then it shows us? I have no idea. The substance all drowned in form.


I would love to like this more than I did. The idea seems good. It just got way too meta for me.
Posted by TSorensen at 21:31