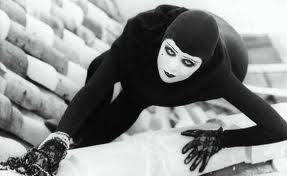 Vampyrerne
When I received ”Les Vampires” I was surprised to find that I had ordered a box set. But the explanation was simple enough. ”Les Vampires” is not a feature but a serial. It is like ordering a season of “Friends” or “Game of Thrones” except that this is long long before you ordered a season of something so you could watch the episodes in rapid succession and not have to wait till next week’s episode. Back then you went to the cinema and watched maybe a bundle of shorts and to make sure people came back you made serials with a cliffhanger that would bring in the audience next week or so to see how their hero got out of that predicament. Effectively the same technique which is used in many tv series still today.


That is ”Les Vampires” in a nut shell.


”Les Vampires” is very old, from 1915, at a time when WWI is raging and has all but killed the French film industry, once the world hot spot for cinema. “Les Vampires” provide escapism for the masses at a low cost and can in that sense be compared with the musicals of the thirties. Or maybe rather the gangster movies, for the plot in ”Les Vampires” is a gang of criminals bend on taking control of the Paris underworld and a significant part of the world above. To prevent this we have the valiant reporter Philippe Guerande and his sidekick Mazamette, who like Tintin and Captain Haddock is equally bend on unraveling the crime syndicate.


The progress of the story is a repetition of almost-there-but-something-new-shows-up. A format we should in our day and time be intimately familiar with from countless tv-series. The difference is that here it is quite imaginative and entertaining. Paris apparently is crisscrossed by secret passages and people with foul intentions abound. Some of the escapes or breaks are silly or stupid, but with my mind set on light, amateurish entertainment I do not mind and having a laugh at the silliness just adds to the movie. I am not sure the series intends to be funny, but it certainly aims at entertaining and that I am.


While the protagonists are a somewhat dull and colorless the antagonists are a joy to watch. With Irma Vep (change the order of letters and see what you get…) the serial has a real star and I find that for me she is the real protagonist, no matter what cause she is fighting for and interesting enough the serial also do have a lot of sympathy for her. She is far from the passive female lead of so many other early films. She has real drive.


I watched “The Vampires” in 15 minute increments and it took me the better part of a month and maybe that is what saved it for me. I do not think I could have handled more than an hour or so at a time, but as it is it is one of those entries I will be taking down again to see and enjoy.


Was it primitive: yes, technically a mess
Did I care: nope
Who’s cool: Irma Vep!
Posted by TSorensen at 18:37