The adventures of Robin Hood 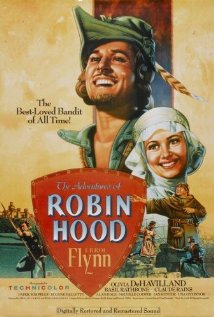 The adventures of Robin Hood is one of those movies many people know of but few people have actually seen, which is exactly me. I were really looking forward to finally getting to see this one and expectations always places the movie at a disadvantage. This one I expected to be an easy watch so I saw it with friends and snacks and good wine and this was also how it turned out.

The mood is really light. They may be fighting with swords and shooting people by the dozens and for the survival of regular folks, but no worries, life is easy, full of laughter and merriment. This is not Robin Hood and his merry men for nothing. It is easy to see why this type of movies have been mocked in later years as we have all have lost our movie innocence, but if we forget it for a moment and assume that innocence then this is really like being a child playing Robin Hood and with this in mind it is difficult not to love it.

Of course it is highly artificial. Nobody is their right mind would ride unseen through the forest with a bright red outfit or any of the other customes the outlaws are wearing and many of the scenes do not last deeper scrutiny. Particularly I found the scene comical when the merry men are having a very merry party in the forest Robin convinces Marian in the justice in his cause by showing how the poor peasants are poor and miserable. Hey, there is a party going on! if you care for them so much, why are they not invited!

But of course if I was a 10 year old child I would not be bothered by that sort of things and it is in that light it should be seen.
The adventures of Robin Hood is one of the first movies in colour and maybe the first blockbuster in colour. Being used as I am now to watching movies in black and white it really takes off decades of a movies age to see it in colour, even as exaggerated as they are here. It was an expensive production and it shows in the details.
It is a long way from  The adventures of Robin Hood to Game of Thrones, but that is not where this movie intend to go.
This is Disney with real actors. This is the original of countless Hollywood productions even of today.
Was it silly? Yes
Did I enjoy myself? Certainly
Did I regret seing it? Not for a second
﻿
Posted by TSorensen at 23:59

Email ThisBlogThis!Share to TwitterShare to FacebookShare to Pinterest
Labels: The adventures of Robin Hood