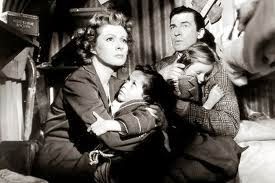 Mrs. Miniver
With ”Mrs. Miniver” I have finally caught up. This is the last of the new additions up to the point where I am on this chronological journey through 1001 movies I apparently have to see before I die. Some additions were good and some were less good. “Mrs. Miniver” is a big hmmmm.

In a sense I am being a bit unfair to this film. I am just coming off the excellent “Brief Encounter”, a realistic and honest film about some ordinary British people experiencing something extraordinary. “Mrs. Miniver” is also about some supposedly ordinary British people going through something extraordinary, but with an entirely different result. In almost every way “Mrs. Miniver” is the opposite of “Brief Encounter” and that is not really a good thing.

Of course it is all about context. “Mrs. Miniver” is essentially a propaganda film made in the US in 1942 for the American public. Its aim was to show how likable the British were and how heroically they were fighting the war and that was the right film at the right time as evidenced by the pile of Oscar statuettes coming its way at the 1943 awards.

If you want somebody to be likable you have to portrait them in your own image and that is exactly what “Mrs. Miniver” does. This is essentially an American story about an American family living a life and fighting a war that would be recognizable to the American public. Ah, there is a sprinkling of British elements, but they are of the stereotypical sort, the kind of postcard British that the locals would merely scuff at. In fact I doubt a Britton in 1942 would find much he recognized in this film. The result is a Disneyland version of England that screams phony.

At the outset of the film everybody are so happy and live their beautiful perfect lives, so careless that you almost smirk at the thought that war is almost upon them. The Minivers are supposedly a middle class family in a Kentish village, but that must be some architect salary! Their palace of a house, their maid and cook and the idle wife fits more into the classical American family ideal, a Stepford Wife’ish ideal rather British country life. Their problems are limited to conspicuous consumption and a son who has got some leftish ideals while at Oxford. The later seems played more for fun than drama. It is understood that his ideas are rather ridiculous and may just serve to tell the innocent American viewer that, oh, in England they have nobility and they still have some silly privileges. Harmless ones though, but fun too, you know, real nobility!

Even the dialogue is borderline annoying and my recent brief encounter just aggravates that impression. The only relief in that entire first half is Dame May Whitty as the old Lady Beldon who is able to stuff enough English vitriol into that old hag to make her interesting.

The second half is better. As reality of war hits like a hammer the impact is so much bigger because it hits this Garden of Eden. There is drama in the bomb shelter and the ride home during an air raid and that saves some of the film. This part gets sufficiently tense and coupled with a surprise ending I did manage to get moved. That is of course engineered and the design is almost overdone. The pathos is thick as mud and played for every cent. The annoying thing here is that although events are starting to get “interesting” the characters remain essentially the same. There is little in the sense of character development. In “Gone With The Wind” Scarlett is forced to evolve in the face of adversity but the Minivers are still their happy careless selves. They are just a bit sad somebody close died and that the Jerries ruined their house. Everybody are so damned busy being heroic that they forget being human.

It was as I said the right film at the right time. A few years later it would not have been even close to an Oscar. William Wyler, the famous director of this film, won the award for Best Director for “Mrs. Miniver”. He would later go on to win it again for “The Best Years of Our Lives”. The differences between these two films are glaring. “The Best Years of Our Lives” is still a great film today, but who remembers “Mrs. Miniver”?

This was a movie that did little for me. It was not on the original list and I did not miss it, but I suppose 6 Academy Awards requires some sort of recognition. So, seen it, check, on to the next one.