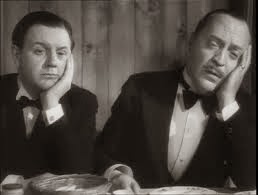 The Lady Vanishes
When the editors of the Book revised the List for the 10th edition they removed a number of Alfred Hitchcock’s films. He was over-represented and the loss of a film like Spellbound I would hardly consider a big loss.

But it was not only a sanitation of Hitchcock films, we also got a new entry in “The Lady Vanishes”. It is a worthy entry, more entertaining than many other films on the list and definitely one I enjoyed watching.

If I had not seen how wide a spectrum Hitchcock covered in his British years I would say this one falls a bit outside his comfort zone. It is funnier, even silly, than the Hitchcock we know and love to the extent that I would call it a suspense-comedy, maybe even a spoof on the genre. This is likely because this was a project Hitchcock took over from another director and carried out without changing it much. Now, I have seen Hitchcock do comedies so I knew he could do it and, I think, if you consider most of his classic films there is a subtle comedic element to them as if he is trying to pull our leg. Though rarely as outright as in “The Lady Vanishes”.

The setting of “The Lady Vanishes” is almost out of Agatha Christies “The Orient Express” (which is quite a coincidence, I am just now on my way home from Istanbul where I saw the hotel where Agatha Christie allegedly wrote the classic novel). A group of otherwise unrelated people are riding a train through an “exotic” part of Europe where gloomy things are happening (in 1938…hmmm…) when a person mysteriously disappears and everybody is a suspect.

Except there are a few twists.

First of all everybody, with the exception of the little lady who disappears, are described as somewhere between obnoxious and annoying. It is really incredible. The lead woman, Iris (Margaret Lockwood) is a spoiled rich girl who is too fine for everybody else and just the type of person you feel like slapping. But alas, she is nothing compared to the male lead, Gilbert (Michael Redgrave), a happy-go-lucky student of folk music (?) who claim it as his right to have people dancing in wooden shoes in the middle of the night on the crowded mountain resort where all the passengers are stranded. He also barges into Iris room to take it into possession since she was the one complaining and is just generally far too presumptuous. Suddenly it is him I feel like slapping.

But we are far from done. We got an annoying magician, a scary baroness, a sinister brain surgeon (?) and an obnoxious lawyer Mr. Todhunter and his mistress. And of course our local Thomson twins, Caldicott (Naunton Wayne) and Charters (Basil Radford). The latter two are the sources of much hilarity throughout and in fact they were such a success that their characters were reused in several films following “The Lady Vanishes”. They are two English gentlemen with a very stiff upper lip and a cool that can only be described as British. Their mission is to get back to England (and civilization) before a scheduled cricket friendly in Manchester between England and Australia and this is what they live and breathe for. A hilarious scene takes place at the hotel when they hear the receptionist receive a call from England. While the receptionist is looking for the recipient of the call our two gents grab the phone and eagerly asks for news only to angrily hang up when the caller is less than interested in cricket. They are definitely modelled on Dupond and Dupont aka Thomson and Thompson.

Another twist is that nobody seems to recall the missing lady. Iris who announces her disappearance faces a blank wall when calling foul play. Did she dream it all? Is it all just a result of her hitting her head? That part sounds more like Hitchcock. He loved this play with perceived reality.

Finally, and that should be clear by now, the missing person is not somebody rich and famous or remarkable in any way, but the unlikeliest character of all: a sweet old English lady, Miss Froy (Dame May Whitty) working as a governess. Why on earth would anybody want to remove her?

Hitchcock has placed a number of political references in the film. It does not take much imagination to see this as a criticism of the English appeasement policy against Fascism and Nazism in Europe in 1938. Mr. Todhunter is a perfect representative of this policy. But it is also a slap against English arrogance to people outside their own circle. It is played for fun, but the message is quite clear.

The comedic elements are both the strength and the weakness of the film. I loved the first half hour of the film, this is genuinely funny. The problem is that the silliness takes such proportions that it becomes a bit difficult to take the mystery part serious. It is just not as scary or suspenseful as it could have been and this carries over into the almost ridiculous resolution with the gunfight on the sidetrack. It is still funny and entertaining but it loses believability and becomes just ridiculous. We only really lack that they start throwing the guns at each other when they are out of ammo.

Then there is the romance between Iris and Gilbert. It is funny that two such annoying characters end up in each other’s arms. However at the time when that happens they have stopped being annoying all of a sudden. That does not exactly cut it for me.

But if you see “The lady vanishes” for the comedy alone this is truly worth watching and I can recall a number of other suspense comedies that works poorer than this. Try watching Iris and Gilbert fighting the magician on the train without laughing? Or the faces of Caldicott and Charters when they line up a cricket game in sugar and Miss Froy has the audacity to ask them to pass the sugar. This is straight out of Monty Python.
So, why was Miss Froy abducted? Frankly, that hardly matters.
Posted by TSorensen at 16:16