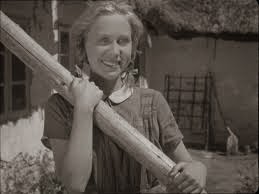 Ditte Menneskebarn
”Ditte Menneskebarn” is the second special entry on the Danish edition of ”1001 Movies You Must See Before You Die”. It replaces “A Matter of Life and Death”, which is an odd choice, but likely due to the overwhelming number of British movies on the list.

It was extremely difficult to find this movie. The DVD is out of print, it is not in the public domain and even those places that claimed to have it just wrote me back that they were working on it. Finally I found a streaming service that offered it only to find out that the player was incompatible with my system. It took two weeks to work it out and now, finally, I can see it. I am happy to say it was worth the effort.

“Ditte Menneskebarn” is based on a novel by Martin Andersen Nexø. He is our equivalent of John Steinbeck and wrote a number socially indignant novels around the turn of the century, a period where this kind of literature was earthshaking and revolutionary. He is probably more known for “Pelle Erobreren”, which when made into a movie won an Academy Award for Best Foreign Language movie in 1988. Therefore no surprise that this is a message movie with an extra thick layer of message.

Ditte (Tove Maës) is born out of wedlock because her mother, Sørine (Karen Lykkehus), got tumbled by the son on the farm where she served as a maid. The farmer bought Sørine’s father off with some money and Ditte is raised by her grandmother (Karen Poulsen) in utter poverty. Years later when Sørine have found a man, a small-time tinker called Lars Peter (Edvin Tiemroth), they send for Ditte and soon Ditte is the oldest child in a family of with 4 children.

While Lars Peter is complacent and clearly the good, albeit poor, father, Sørine is bitter and unhappy with her lot in life. She is obsessing about the money her father got and saved for Ditte and takes it out on Ditte. This comes to a head when Sørine seeks out Ditte’s beloved grandmother and kills her in her search for the money. Sørine spends most of the rest of the movie in prison and Ditte, betrayed by her mother and bereft of her grandmother is now, still a child, the housewife of the little family.

Together with an intermezzo with Lars Peter’s crook of a brother the little family have to leave for a another region to start new life and although things start out fine, Ditte got a position as a maid on a farm, history is about to repeat itself.

Life is hard and unfair for Ditte and her family and the message of the movie is clearly that this unfairness is wrong. It is rather heavy handed and I am not sure the movie would have worked so well today, but two things save the movie.

The first thing is Ditte herself and her siblings. As a little child Ditte is the most adorable little girl (Jette Kehlet). Just thinking about her makes me cry. She is the kind of girl you just have to reach out and hug. Later she blooms as the sweetest girl imaginable. She learns toughness but remains innocence incarnate and because we cannot help loving her, the unfairness of her lot seems so much worse. This is largely due to Tove Maës. She made a career out of playing sweet innocent girls in romantic pastoral films (much later in life she appeared in “Riget”, also on the List), but rarely with the nerve and bite evident in “Ditte Menneskebarn. Her three siblings are cut from the same stock and it is worth noting the brother Kristian. He was played by a very young Ebbe Langberg who eventually got a solid career as actor and director in and of Danish movies.

The second asset of the film is the production quality. This is a movie from 1946, Denmark has just resurfaced from the war and I had no idea resources were available to pull off a movie of this quality. Acting, direction and filming are all up to Hollywood standard and frankly far better than the typical Danish movies of the 50’ies and 60’ies. This film is a far cry from the mass-produced pastoral rom-coms that constituted at least 80% of the Danish movies of the era. And because of this excellent production the pathos never turns into sticky melodrama but remain raw and palatable.

There are two details from the movie that I would like to mention. The first is the portrait of the characters Sørine and Lars Peter. Sørine is clearly a source of grief in the family and her actions and attitudes are clearly wrong, like when she beats up Ditte and is too lazy to get out of bed herself to take care of the children. But as a nice touch we actually understand her bitterness and where it comes from. Fate has not been kind to her. She was a beautiful girl, but because she got pregnant she ended up in poverty. It was never her fault and she does not accept her lot. Unfortunately as a housewife she only has a backseat driver’s license to her fortune. She is powerless to do anything on her own and only by coercing the people around her, particularly Lars Peter, can she hope for any advancement. Unfortunately for her Lars Peter is a very different type of person. He is honest, good and generous. He lives and breathes for his family including Ditte and is willing to give people (like his scum of a brother) a chance, but he is not ambitious. He is content with life and chooses to look at what he has instead of what he does not have and so Sørine is stuck and frustrated. Later when we see Sørine again when she returns from prison she is a broken woman. As feisty and spiteful as she was it is much worse to see that broken shell of a woman.

The second detail is the (in)famous bathing scene. Late in the movie the adolescent Ditte takes a naked bath in a lake. She is beautiful and very little is hidden. This was apparently too much for the US release where this scene is cut out. That is a shame because this is actually an essential scene. It places her in juxtaposition to the farmer’s son’s hardline piety as a natural and innocent being and is a lash out against hypocrite and self-righteous bible punchers. Those in power in general and the farmers on Bakkegården in particular are violating the innocents. One could even take the symbolism even further and see the bathing scene as a kind of baptism, but a different one than that of the hardliners, especially since the talk immediately after turns to religious subjects. All that unfortunately falls flat without the bathing scene.

“Ditte Menneskebarn”, loosely translated to Ditte, Child of Man, was a lot better than I expected and one that I enjoyed watching. It is also a badass tearjerker and I cannot remember the last movie I cried this much from. I can definitely recommend watching it, but be forewarned, it is really difficult to find.