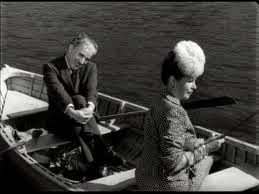 Monsieur Verdoux
Charles Chaplin and the little tramp are synonymous so much that we often simply call the little tramp Charlie Chaplin. To think of Chaplin as any other character simply feels wrong. Talk about a type cast character! However Chaplin actually did a number of movies after he let the little tramp to rest with “Modern Times”. Most famous is probably “The Dictator”, which for some obscure reason is not on the list. That is however his later “Monsieur Verdoux”.

Chaplin himself is Monsieur Verdoux, a little elegant if somewhat cynical French gentleman. You would think that this character could not be further from the tramp character, but in fact as the movie goes on the tramp becomes more and more apparent. Try as he may, Chaplin could never escape the tramp.

You did not see that one coming, did you?

Chaplin took a story (originally from Welles) about a real life French murderer and turned it into a comedy with a sharp social bite. Yes, Verdoux is busy (very busy) attending to all his women. For each he has a different character he plays and a different angle to his ploy, but it is all about getting access to the money before he sends them off to the next world. It is all business. He used to be a bank clerk before getting laid off and he goes about his new profession in a very professional businesslike manner. The profit he invests on the stock market and from time to time he returns to his family, his invalid wife and little son, who only know that he is busy doing some sort of business. It is really just a job that happens to involve robbing and killing middle aged women.

We see him in action and he is really good at it. So charming. And frankly those women that he finds almost have it coming. They all seem air-headed and horrible and in some sick way he might even be doing us all a favor. This setup is all very bizarre and only a comedic genius like Chaplin could get away with making it funny, but it may very well be the bizarreness itself that makes it so funny. Because it is funny. It is almost an elegant version of Groucho Marx conning Margaret Dumont in all her incarnations.

Hilarious it gets when he is finally overmatched. Annabella Bonheur (Martha Raye) is a particularly feisty widow, who also happens to be rich after winning the lottery. Verdoux is acting an elegant sea captain (convenient for staying away for long periods) who is entertaining her and trying to ingratiate himself into her possessions. But although she may seem and act airheaded Annabella is also cunning and quite a match for Verdoux. His sneaky attempts at killing her all fails spectacularly resulting in much hilarity and I frankly do not know which is the better (or worse), the poison attempt inadvertently foiled by the unlucky maid, or the disastrous boat trip. It is here in the boat that Verdoux resembles the little tramp the most. Well, he is the little tramp when he tries to look innocent.

After the failure with Mrs. Bonheur Verdoux tries his luck with another rich widow, Mrs. Marie Grosnay (Isobel Elsom). This works out brilliantly until Annabella shows up at the wedding and hilarity ensues. Verdoux’s desperate flight may be the funniest scene in the movie.

Hereabouts the movie takes a more serious turn. The world is changing. At the stock market crash many people lose everything including Verdoux. We see clips of Nazis and marching soldiers and it is clear that the world is about to go to hell. We now find Monsieur Verdoux again, but a lot more down beat version of him. Apparently he lost his wife and son (!) as well as his money and the only thing left is his cynicism, but of that he has plenty. It is of course this reformed version of himself who finally gets caught and the movie finishes with the court case against him.

Chaplin uses the movie as a platform for his criticism of modern western society, that much is very clear. In the court case against him he references Fritz Lang’s “M” by letting the accused be the accuser. Where Lang questions society’s right to convict those who cannot help their actions (the sick and insane) Chaplin compares Verdoux’s own killings to the mass murder committed by state nations when fighting wars.

I can follow his criticism of capitalism as a sort of robbing and murdering. That is not so different today. But when he gets to the criticism of waging war I understand why people got furious with him. This is scarcely 2 years since the end of WWII, a war that was forced upon the allies. What did Chaplin really want from them? That they should have lain down and die? I can understand why people who had just fought a war were pretty pissed with him. 20 years later it would have worked reasonably, but not in 47.

I think the political message misfires near the end of the movie, but that is really also my only argument against the movie. Had it stopped with his arrest the movie would have been 20% better. Still I think this may be a different Chaplin movie, but it is essentially Chaplin. Verdoux is just an elegant, cultivated little tramp.