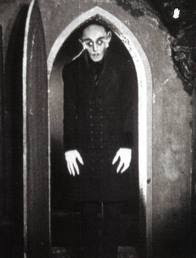 Nosferatu
Some genres last better than others over time. Physical comedy lasts very well, horror movies very poorly. Maybe we are just more jaded today or maybe the toolbox back then was just not up to the task of making us frightened. That however I think is not exactly correct. Both Dr. Caligari and Körkarlen use the available tools excellently to create the needed gloom.


“Nosferatu” is a horror movie of that age and it suffers in many ways from poor aging. Except for one crucial element: The primary antagonist.


County Orlok aka. Nosferatu aka the actor Max Schreck is a true find. He is by far the most demonic looking vampire I have yet seen. But not like a bat or a tuxedo clad pale undead, but like a rat. A sneaky, hungry and resourceful rat. In a much later movie about the shooting of “Nosferatu” starring John Malkovitch as the director Murnau Max Schreck turns out to be a real vampire and even then did he not look half as frightening as Count Orlok in the real “Nosferatu”.


Unfortunately the rest of the cast do not live up to this standard. Especially the protagonist Hutter is pretty lame, which means that I feel like fast forwarding until Count Orlok appears and then run it in slow motion.


I have already mentioned Murnau and yes, it is the great silent director F.W. Murnau who directed this and maybe I am biased when it comes to his movies but I really want to like it. I see where he got to later and wish he was this good back then. There are good things beyond Orlok. The castle for instance, the spooky ship with the crew mysteriously dead and now full of rats and Orlok appearing in a window in the next building to where Hutter lives. But if you read the list carefully you will notice that these scenes belong to the dear Count. Whenever he is involved, this is good stuff.


The story is briefly that Count Orlok has decided to leave his old castle to move to a city in Germany. Hutter is sent as legal representative to meet the count and then arrange for the acquisition in Germany. Already while approaching the castle does he realize something is fishy when the villagers warn him, his coach refuse to take him any further and a mysterious ghost carriage bring him the last stage to the castle.


Orlok arrives in Germany by boat (which I find a little funny as Transylvania is quite landlocked), killing the crew in the process and move in next door. And mayhem ensues…


This is all fairly close the well-known Dracula story and indeed the name, Nosferatu, is really the only significant change. There was just this little detail about getting permission to make a Dracula movie from the Bram Stoker estate… ahem. This was of course recognized for what it was; an infraction on the rights to use the story and the movie was shut down and destroyed shortly after the release. Only because a few copies were saved can we today enjoy Murnau’s early work, which is, despite its shortcomings, still way better than Tod Brownings ridiculous Dracula from 1931.


Not to mention Max Schreck. But of course he would not so easily disappear. He is after all an undead.
Posted by TSorensen at 13:19