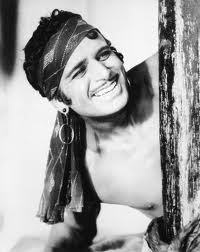 Tyven fra Bagdad
I go through this list rather strictly. As far as possible I try to be chronological and force myself to see films I would not have considered seeing if they were not on the list. I also force myself to finish a movie even if it is tough, stupid or bore me to death. It is not some kind of obscure self-punishment driven by OCD, but simple experience. Again and again I have realized that there is a reason why these movies are in the book, that even the weirdest or most boring movie has something to give and I am richer for having seen them. I am the first to admit that the reward can be really tiny (Zemlja, Foolish Wifes, Intolerance), but the many happy surprises are enough to prove to me that I am right.


“The Thief of Bagdad” is such an example. The book is always excited about any movie, but this sounded like something that would appeal to me. Half an hour or so in I had changed my mind. This was the most ridiculous, stupid, over-acted garbage yet from the book. It looked like a joke, a cliché on a silent movie. Everything was exaggerated. Douglas Fairbank living the merry life of a thief, laughing out loud, happily pilfering jewels, money and bread more annoyingly brazen than anything Mel Brooks have ever cooked up. And his moustache, oh my God!


Had it not been a list movie I had probably given up right there. Even on second viewing this part bothered me mighty.


But then something changed.


I still cannot put my finger on what it is, but it has something to do with his visit to the princess. Something came over him that changed his character. Now it was not so stupid anymore. The mystery of the story became, well, not believable, this is a fairy tale, but more in tune with the character. I started to root for him and even found his shenanigans charming. It was a transformation that was happening as much in me as a viewer as in the film and it would take a smarter person than me to pin it down. Certainly I was happy I had continued watching it. This was good stuff!


The thief had initially planned to plunder the castle of the caliph, but instead of raiding the castle he falls in love with the princess and gets away with a… shoe. He is so infatuated by her that when it is announced that suitors are arriving from far-away places for her to pick her prince, the thief encouraged by this friend in crime joins the suitors pretending to be a prince of some obscure islands. He is found out and flogged for his impertinence but not before the princess has fallen in love with him. She has to pick among the other three princes, but stalls for time by sending them out to find the rarest gift and return it by the seventh month.


Our hero the prince, with the princess’s ring as symbol of her love, takes up the challenge as well and goes through fire and water (literally!) to find a box of magic powder. The three princes are not idle either and find their own precious items. The little, fat and half asleep Persian prince have his servants track down a flying carpet (yes, indeed!). The Indian prince has his servant climb an ancient statue to dig out its eye, an all-seeing crystal. The servant falls down and dies, but the prince is happy, the treasure is unharmed. The Mongol prince is the bad guy. He covets both Bagdad and the princess and will take them either by cunning or force. He has spies following the other princes and has his own servants find a special healing apple that cures poisoning. The plan is get the princess poisoned and then be the hero coming to her rescue with the healing apple.


The three princes meet a day’s ride from Bagdad, discover from the crystal that the princess is ill, fly in using the flying carpet and heal the princess with the apple.  Trouble is, which of the three items was the critical one? The caliph and princess need to think it over and the Mongol prince change to plan B and activate the 20.000 troops he has in town and take over control.


Meanwhile the thief realizes the power of the magic powder and so he conjures up a noble steed and an Elvis outfit and comes to the rescue of the princess and the city.


This story is complete with monsters and mermaids, evil villains and magic tricks. The over-acting is, after the openings idiotic impression, reduced to a sort of simplified sign language that reduces the number of inter-titles. In other words I get entirely used to it. But most importantly the thief becomes a real character who does not just get away with anything.


The set is amazing. I enjoyed the way they recreated an oriental city and filled it with people. In terms of scale this easily compares with Intolerance. On top of it was used a score that fits the ambience perfectly. This is actually something I have been wondering about, since the movie is obviously long before the advent of sound. It fits perfectly and sounds very… old as if original, but I suppose that cannot be.