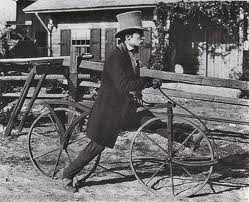 Krudt, Kugler og Kærlighed
Television here in Denmark rarely show silents, but when they do it is almost always slapstick comedy. There is a good reason for it: They are still as funny today as they were 90 years ago. One reason for that of course is that this sort of physical comedy is not hampered by lack of dialogue. Another reason is that they were really good at it back in the twenties. My personal favorite was always Buster Keaton. He was easier to get than Charles Chaplin and Harold Lloyd was, well, just not present. Knowing there would be quite a few Buster Keaton movies on the list I bought box set with six disks (!) and went ahead watching them all.


That is a lot of Buster Keaton and I know that some would call it heresy but it is not all of it brilliant. However the picks for the book are good and I could name a few others that could easily replace some of the poorer choices in the book. Yet Buster Keaton is with 5 titles much better represented than Harold Lloyd (1) or Charles Chaplin (3), so I guess I got as much as I could ask for.


When Buster Keaton made “Our Hospitality” he had already made movies, especially short two-reelers. His technique was therefore fully developed and we see it here in all its glory. Keaton has a very good sense of what looks funny. That is not just a matter of comical stunts, though he excels at that as well. A good example is the ridiculous big hat he is wearing or the primitive bike he is driving with perfect sincerity despite the impracticality of it. The setup is also comical in itself; diminutive Keaton as Willie McKay walking totally unwittingly into a family feud with the Canfield clan represented by three big and trigger-happy men. The odds are so uneven that it screams to heaven. You can almost see Keaton saying: “eh, ups…”.


It actually starts well enough for Willie McKay. He has inherited some property in the south and on the way there he becomes acquainted with a pretty girl. Very well acquainted indeed. Unfortunately she is Canfield, the mortal enemies of the McKays (or rather the other way round) and Willie only finds out when he arrive at their house as a guest. Luckily the Canfields are bound by southern honor to offer hospitality and NOT kill their guest, hence the title, and so Willie is safe as long as he stays in the house.


There are basically two parts to the story; the train ride to the south and Keaton trying to get out of the house without getting shot when he leaves. That sounds thin and it probably is, but both settings are so funny and well made that it is really enough. The train is supposed to be the earliest train in America which is of course hopelessly primitive and hardly up to the task and thus a source of much comedy.


Keatons deadpan style is also perfectly fitting for this story. It is a trademark of his that is expressed through his face and almost depending on the movie being a silent. I think that had a lot to do with why he did not survive the change to sound. Buster Keaton was the silent comedy.
Posted by TSorensen at 21:48