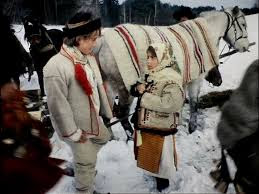 Shadows of Our Forgotten Ancestors
Among many other pleasures, one of the great things about following the List is that I get to see things I probably would never have experienced otherwise. “Shadows of Our Forgotten Ancestors” is such a movie. I honestly do not think I would have searched out an old Russian (or Ukrainian) movie about folklore in the Carpathian Mountains, but because of the List I now have that truly unique experience under the belt.


This is not an easy movie to describe.


Because of the way it is filmed, and the story told it is a rather confusing film. Hand held camera was not invented by the Dogme concept or the found footage genre, but was happily employed by the producers of this particular movie. Combine that with a minimum of dialogue, which is generally replaced by songs and horns and general crowd noises, and I am not always certain of what is actually happening. Luckily, the story is so simple that the over-all picture is pretty clear.


We are with the Hutul people in the Carpathian Mountains sometime in an undefined past. The boy, Ivan (Ivan Mykolaichuk) lives in a tough and wild environment that takes both brother and father from him. He meets a girl, Marichka (Larisa Kadochnikova) from a rival family and they grow up loving each other. When Ivan comes of age he leaves his village to take up work in another village while back home Maricka falls into a river and dies. Ivan grieves for a long time and even when he takes on a new wife he cannot forget Marichka. His new wife, Palagna (Tatyana Bestayeva) turns to sorcery and finds another man as lover. Of course, this all ends poorly.


There are two big draws here, the primary one being the very detailed depiction of the Hutul people. We see it all, festive and slaving to make a living, summer and winter, music, songs, folklore, religion, anything. There is a large part here that serves as a very efficient documentary on a people I had never heard of before. It is not a cold, descriptive presentation, but one that is filled with all the magic and energy that is key to their lives. That makes for very interesting viewing.


The second draw is the unique cinematography. While I am just as sick of hand held filming as anybody else, there is something magic about the choices made here. The soundscape for one, replacing much of the dialogue, the jarring and jagged first-hand viewpoint is another. Something about it feels like an old silent movie trying to tell a story without title-cards. Which, curiously, is another ingredient of the movie.


I don’t think the style of filming would work on any story, but this one is so basic that it is possible and there is so much to look at. It is tempting to think that this would then be a naturalistic film using realism as a tool, but I would say it is in fact the opposite. This does not feel like reality, but a filmed fairy tale, which I am of the impression that it actually is. It is heavily stylized combined with the sense of being there.


It is an odd movie to come out of the Soviet Union in the mid-sixties. It describes and endorses the uniqueness of a cultural minority under a system that had been working very hard to eradicate non-conform cultures. Also there are no socialist themes here. No oppressed working class, no submission to the common good. How on Earth was this allowed to be made?


The story did not do that much for me and the characters were not sufficiently fleshed out. Sometimes I even got confused on who was who. How many big moustaches can you have in a movie? But that is not why you should see this movie. It is for the unique experience and the wonderful view into the Hutul culture that this movie deserves a viewing.
Posted by TSorensen at 22:53