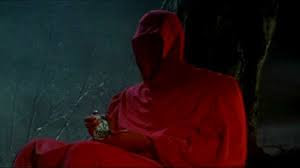 The Masque of the Red Death
Old horror movies are a lot of fun. Even when they are bad, they are usually fun, though for reasons unintended.


“The Masque of the Red Death” is a lot of fun, though I am not sure how much is intended and how much is not.


The movie is based on a short story by Edgar Allan Poe by the same name. It takes place in medieval Italy where a decadent and cruel prince, Prince Prospero (Vincent Price), is giving lavish parties and worshipping Satan while the countryside is plagued by a mysterious illness known as the Red Death. Already here there are links to some very famous Italian stories from the period of Black Death in the fourteenth century.


Anyway, Prospero has captured a girl, Francesca (Jane Asher), her father and her boyfriend, Gino (David Weston) and taken them to his castle to play with them. At the castle Prospero’s mistress, Juliana (Hazel Court), is jealous and decides to show her devotion by marrying herself to Satan. This includes a lovely inverted cross, burnt on her breast (oh gasp!). Meanwhile the guests are having a merry time, something that culminates in a masque ball involving a burnt great ape and a hooded figure in a red cape.


It is a silly story, it is difficult to claim anything else, and it makes little sense when you start thinking about it. Yet it is also completely bizarre and with gusto for the outrageous, especially whenever Prince Prospero is involved.


The production value it is very B in terms of acting and script. Some of the lines, especially Gino’s and Francesca’s, are toe-cringingly bad, beyond cliché and camp and deep into corny. Many, if not all, the scenes are staged as for a theater rather than a movie and there are details, such as Gino’s hairstyle, that scream of poor decisions.


Then on the other hand everything that relates to the bad guys tell of a much higher production value. The castle sets, the colored rooms, the evil ceremonies and particularly Vincent Price’s Prospero. It is such and odd clash. Was this made intentionally poor or were they serious and just decided to pour all their attention on the bad guys? This is supposed to be a cult movie and I can see why it would have a following. The camp value is pretty high.


The Death character is totally borrowed from Bergman. Here it plays cards rather than chess, but that is only a detail. In every other way this character just changed sets. But the other way is also true. I can see a lot of Rocky Horror Picture show in this movie to the extend that I suspect the producers of that movie used “The Masque of the Red Death” and “The Black Cat” as their template.


I would not call this a good or a great movie by any standard. In fact I am surprised it is on the List, but it is a fun and bizarre movie to watch and certainly, with my taste for awkward movies, this one hits a lot of buttons. I have not watched any other movies by Corman so I cannot say if this one is representative, but apparently the List editors seem to think this is Corman’s moment of glory so I wonder just how campy his other movies are. Could be I should look into that.
Posted by TSorensen at 18:37