I am not really into cursing on this blog, but I have to say, this was pretty fucked up, literally.

The Book describes “In the Realm of the Senses” (“Ai no Korida”) as being rather explicit, but I think that is an understatement. In an interview, director Nagisa Oshima called the movie hardcore pornographic and that, I think, is more precise. A Japanese pornographic movie, well, the List is supposed to cover all movies of significance and I suppose that genre was underrepresented.

There really is no hiding it, the movie goes all out right from the start, and the first thing I thought, just a few minutes in, was that they are not holding back here. It is Tokyo in 1936 and Sada (Eiko Matsuda) is a prostitute at a brothel. She has a… very healthy appetite and when the owner of the brothel, Kichizo (Tatsuya Fuji) takes an interest in her, she is so ready. Sexual harassment is just what she has been waiting for and he meets his match in carnal appetite. For the majority of the movie, we watch the two of them have very real, unsimulated intercourse and we see everything.

Eventually it becomes clear that their appetite is not so healthy after all. Their sex becomes wilder, usually they seek spectators, group sex, violent sex and at some point, I believe they killed an old lady Sada wanted Kichizo to have sex with. It becomes obsessive, they are not eating, hardly getting out of bet, just constant sex and Sada becomes jealous that Kichizo may have sex with his wife. They start playing strangulation games and this ends in something I hope I will never see again. Seriously messed up.

The point of the movie is to portrait a couple getting so obsessed about their sexual relationship that they drift off into a tangent to reality and create their own reality. It literally drives them insane. The art, and I suppose the reason this movie is considered special, is that this drift is made into something beautiful, into something we can almost follow. Almost I would say, because it is also batshit crazy.

Sada Abe was a real character who back in 1936 killed her lover and cut off his genitals, but so charmed and fascinated the public that she got away with relatively light punishment. She is, as I understand it, quite a legendary character in Japan and there have been some attempts to tell this juicy story, but I doubt anybody have tried this hard to get into her head. And her body too.

I found it a very disturbing movie. It is very aesthetic, but it is a shocking aesthetic that makes me very uneasy watching it. I feel too close to them and I become one more they have sex in front of. What starts fairly harmless becomes more and more disturbing and by the time we got to the strangulation scenes I had difficulty watching it and the final scene… ugh… as I wrote above, I never want to see that again.

If watching erect penises, semen dripping out of the mouth, food in the vagina and strangulation games is your thing, well, there is a lot for you here, but I cannot honestly call this a pleasant movie. It will take some time to get past this one. 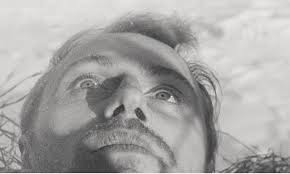 Few countries are as vilified right now as Russia and though it is stupid and counterproductive to generalize, it cannot help but influencing my view on this movie, “The Ascent” (“Voskhozhdeniye”). This is probably the wrong time to objectively review an old Soviet movie, but it is next on my List so, no way around it.

This is a movie which, despite its significant length, is rather short on story. It is the second world war and a group of Russian partisans are being chased through the forest by the German army. Short on food, two soldiers, Rybak (Vladimir Gostyukhin) and Sotnikov (Boris Plotnikov) are sent to a village to procure supplies. It is deep (and very snowy) winter and Sotnikov is ill. There is a brief encounter with a German patrol and Sotnikov is shot in the leg. The two soldiers seek refuge in a farmhouse belonging to a woman and her small children, but are discovered and taken by another German patrol.

Now follows an interrogation by a collaborator, Portnov (Anatoli Solonitsyn) where Sotnikov refuse to corporate despite torture while Rybak quickly breaks. The rest of the movie, until the execution of Sotnikov, the farm woman, a headman and a young Jewish girl is about establishing that Sotnikov is a saint and Rybak hardly deserves to be called human.

And that seems to be the message of the movie. Those who stand firm and take a bullet for their country are admirable saints, while those who just wants to survive are dogs who do not deserve it.

As simple as that.

It is practically the opposite message from most of the Vietnam movies from this period and forward and appears tailored to follow the party line of complying at all costs. Something that really has not changed in that country. The message also seems to apply today, though I wonder how many of those Russians fighting in Ukraine are Sotnikovs or Rybaks…

This is a very bleak looking movie. The black and white cinematography is almost whitened out by the snow, all characters are worn, damaged and shabby looking and even the soundtrack (cannot really call it a score) is disturbing. You feel you are in an environment on the brink of death. Those alive are only so because they are not dead yet and the value of life is pathetic. The Germans are non-persons, monsters in uniforms, and the Russians are all into their futile heroism. There is no more depth to them than that. The only question that matters is how to die.

This was not a movie I enjoyed. The intended intensity was to my mind way over the top, the message questionable and the delivery unpleasant. It is a Christ analogy where Sotnikov dies to take our sins from us, and we should praise and worship him for that. We even get a halo around his head, it is that thick.

For a suffering population asked to make sacrifices for a greater good, I suppose it serves a purpose, but as a viewer I could think of a thousand movies I would rather watch. 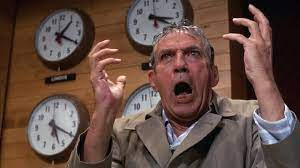 Imagine if television networks only cared about ratings, about the price they could charge for the commercial blocks and went as low as possible in the attempt to appeal to our lowest instincts, so that we, despite ourselves would watch their junk instead of something else. This crazy, far-fetched and completely unrealistic scenario is the premise for Sidney Lumet’s movie “Network”.

When Howard Beale (Peter Finch), a longtime news-anchor at the UBS network, learns he is getting sacked for poor ratings, he suffers a sort of breakdown. During one of his last shows he announces on live television that he has been fired and will commit suicide on the next show. While his friend, the news division manager Max Schumacher (William Holden) is stunned and tries to protect Beale, the programming chief Diana Christensen (Faye Dunaway), spurred by the attention Howard got, wants to exploit it. She sells the idea to management and suddenly Howard Beale has a show where he can rant and scream. Never idle Diana develops the show and in parallel tries to setup a show called “Mao Tse Tung hour” with a terrorist organization where they can film and broadcast their terror attacks.

UBS is a recent acquisition of the larger corporation CCA, who are not too pleased with the deficits made by UBS. Especially the news division is not making enough money and so gets the axe. Diane’s new shows however are making UBS profitable again and so she is a hero, along with her manager Frank Hackett (Robert Duvall). CCA is itself being bought by Saudis and when Howard learns this, he starts ranting on that in his show and he is no longer amusing to the board. Top-dog Arthur Jensen (Ned Beatty) convinces Howard that the world is a depressing place run by big business so learn to live with it. Howard picks up on that, it becomes his point on his shows and so, with such a depressive message, his ratings plummet. Management sees no other choice than to let the terrorists assassinate Howard Beale. On live television.

This is a super-sharp satire on the television industry and as grotesque as it is presented, nothing here really feels surprising. Sadly, I am confident this is fairly close to reality. This is of course also why it is funny. We recognize it. Television is stupid in order to appeal to the lowest denominator; the shows know no boundary and we are the cattle to milk. We are there for the network, not the other way round.

What works tremendously well in this movie is that it never goes for slapstick. It keeps it real all the way through, there are no hidden smiles or ironic distance, but characters that take themselves serious. Faye Dunaway in particular as Diane is completely outrageous, but perfectly serious about it. She is real enough to avoid being a caricature, and yet she has given up her humanity to dedicate herself to ratings. She has no filter at all.

Maybe the funniest scene of the entire movie is where the network with their lawyers and the terrorists with their lawyers are negotiating the contract for their shows. Badass terrorists discussing clauses in legal documents. Isn’t this sort of capitalism exactly what they are fighting against? It was hilarious.

Howard Beale, the crazy man on screen, is only half as outrageous as what is happening behind the shows. The cynicism, greed and power games are way crazier than a man screaming that he cannot take it anymore.

“Network” is of course just as relevant today as it was in 1976. Streaming probably has not helped. If television gets too stupid, we have alternatives (I gave up on cable years ago), but the networks seem convinced that lowering the bar enough will bring people back to flow-TV. This means that Network hits home 100% and I can highly recommend it.