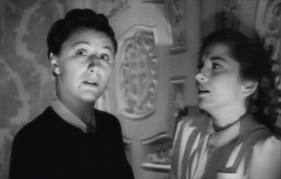 Rebecca
I have finally received the next batch of movies and can now continue my quest down the list with entry number 133, ”Rebecca”. And what a movie to continue with! This is one of very classic movies: A Alfred Hitchcock AND David O. Selznick AND winner of two Oscars including Best movie film.


Well, I am suitably impressed by “Rebecca”. I sit back with a “phew, that was some movie” feeling, although thinking back on it the story is fairly run of the mill pulp standard. I guess the combination of Hitchcock and Selznick was able to turn the story into a suspenseful thriller with an unusually chilling touch. There were a number of moments where I had to stop the movie for a few moments to calm myself over something silly as like how will Max react to her dress. It takes some skill to turn that into adrenaline!


Joan Fontaine (the sister of Olivia de Havilland) is a nameless English girl visiting Monte Carlo as hired companion of the delusioned gossip Edythe van Hopper (Florence Bates). Here she encounters the severely depressed English nobleman Maxim de Winter (Laurence Olivier). Maxim and the girl soon find themselves attracted to each other as she brings new life into his tormented soul. Maxim’s late wife we learn died under mysterious circumstances in a boat accident and Maxim never really recovered. Until now. The girl is as much a nobody as de Winter is a celebrity and I suppose it is her way of accepting and seeing him as he is and not a celebrity icon that makes him love her and let him be Maxim and not Mr. de Winter.


We have a sub story around van Hopper, the wealthy hag of a gossip who desperately craves the attention and recognition of Mr. de Winter while behind her back her hired companion is actually dating him. This part is funny and witty and the scene when van Hopper realizes that her assistant has bested her is priceless.


These were the happy days of innocence.


Then the stage change for the second act and also the mood, from light to oppressive.


Mr. and now Mrs. de Winter arrive at his ancestral home, the famous and imposing Manderly. Here I am getting a bit confused. The moment they name the place Manderly (happens in the first line of the movie) I am thinking “Dammit, I know this place!”. Either I have seen this movie before and forgot all about it or Manderly has gone and become an iconic place and I know it from somewhere else. I find the latter more likely but I cannot put my finger on exactly how and it bothers me mighty.


In any case life at Manderly is everything life in southern France is not. Slow, oppressive, hidden truth and possibly ghosts, namely that of the late Mrs. de Winter, Rebecca. Her presence is everywhere. Items are arranged as she liked them, her rooms are locked down, but maintained as if she still uses them and her initial “R” is everywhere from letterheads to pillows. The presence of the late Rebecca seems particularly promoted by Mrs. Danvers (Judith Anderson), the housekeeper, who is bent on mentioning Rebecca in every second of her sentences and disdains the new Mrs. de Winter with a vengeance. We get the impression that Rebecca was something of a paragon and nobody, least of all a nobody like the new Mrs. de Winter, would be able to take her place. Maxim frets every time he is reminded of her and the new Mrs. de Winter soon finds herself a fish very much out of the water.


This whole affair is soon getting to her and she more and more looks like a nervous wreck. Maxim is equally falling apart and it all comes to a head at a costume party held at Mrs. de Winters insistence, where she, encouraged by Mrs. Danvers, shows up in a dress exactly like one Rebecca used to wear. The anger of Maxim almost undoes her and we get a terrifying scene where Mrs. de Winter faces the possibility of a deadly jump into the fog with Mrs. Danvers whispering fuel to the desperation consuming her over her shoulder. Our suspicion that Mrs. Danvers will go to great lengths to keep Mr. de Winter a single widower is thus confirmed and she is truly frightening. Hire her as a nanny and your children will spend the rest of their life and the family fortune on shrinks.


Only the sudden emergency of a ship sinking off the coast breaks the spell and we move on to the second crisis: While saving the sailors a second ship is found and onboard a long dead woman, Rebecca, and Maxim looks like the guy who murdered her.


This is the third act, a crime story that includes blackmail, secret identities and adultery. Juicy stuff indeed and with several unexpected turns. I will not delve into this part as that would be too much of a spoiler, but the grand finale is the utter destruction of Manderly and the deadweight it symbolizes on the shoulders of Mr. and Mrs. de Winter.


There are so many aspects of this movie that impresses me.


The structure of the movie with three distinct acts playing expertly with our emotions. The gaiety and carelessness of act 1, the horror of act 2 and the suspense of act 3. I fell for it entirely.


The characters of act 2 feed the mood of something very very wrong extremely well. Not only, but particularly the truly scary Mrs. Danvers. The picture of the two women in the same frame, cold and scary Mrs. Danvers and frightened and fretting Mrs. de Winter in juxtaposition is a true gem, wow!


We also get this more English than English attitude with understatements, politeness and the stiff upper lip covering an undercurrent of threats, warnings and hints of disaster. It is the unsaid that carries the direst of threats.


My only real complaint is that our two leads seem almost too caught up in their own misunderstanding of the situation and each other. Had they spelled out theirs fears and worries right away much of the drama could have been avoided, but that is a classic discussion that not only applies to “Rebecca”. Here it can certainly be excused by this entire culture of suppressive English upper class mannerism. Yet these two people represent the antidote of that culture and so should exactly be able to talk it out early on.


Well, you cannot have it all and I still think they do a splendid job as Mr. and Mrs. de Winter. I much prefer Laurence Olivier in this role to that of Heathcliff in “Wuthering Height”. In Rebecca he is far more believable as a troubled soul.


This is the best Hitchcock movie so far and now I am really looking forward to the next one.
Posted by TSorensen at 14:50