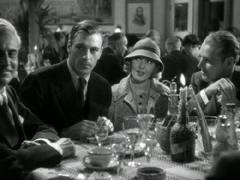 En Gentleman Kommer til Byen
In 1936 Frank Capra made the first version of “Mr. Deeds Goes to Town”. He did very well and earned himself an Academy Award for the effort as best director. Since then this fairy tale has been reproduced in countless forms and variants even in one case under the same name, but in my opinion this original is still the best version of the story.


The story is simple, but both fantastic and romantic. A regular guy finds himself inheriting a fortune and is hurled into the madness of high society. What to do with all this money when all it seems to generate is trouble and anxiety? Fundamentally a story of the values of regular honest and upright people against the depravity of modern life.


Of course in such a story we identify with the regular guy and through his eyes the trappings of the rich and wealthy are revealed as hollow and hypocrite, which of course is mighty satisfying to a depression age audience. A theme already explored in “My Man Godfrey”.


What better actor to be the regular guy than Gary Cooper? He and Jimmy Stewart must have had a running competition on being the most average, but upright, fellow in Hollywood. In this film Cooper scores extra points in that competition. Longfellow Deeds is super likable with an almost childlike innocence and excitement combined with enough spine and honesty to lend him solid integrity.  He may be naïve and friendly, but he is not a sap, which is an error his surroundings repeat again and again.


In Longfellow Deeds world answers are simple and matters are usually black or white. You just have to apply common sense then most problems can be reduced to a simple yes or no. The comedy and drama is generated when such a creature is taken out of its normal small town habitat and placed in New York with an unexpected fortune. How does he fare in a world ruled by greed, envy and the all-mighty dollar? At first that world laughs at him, but soon he exposes it for what it really is.


Everybody wants Deeds money. His lawyers are already busy embezzling his fortune and eye the rest of the money. The relatives who did not inherit have gotten a sore ass from it and sycophants from basically every corner of society wants access to his coffers. On top of that the tabloids are on to him. Gossip on Deeds sells newspapers and soon Deeds have to dodge paparazzi’s as well.


One of these is better than most. Louise "Babe" Bennett (Jean Arthur) insinuates herself into Deeds life by pretending to be Mary Dawson, a damsel in distress. She is so successful that Deeds falls for her completely to the extend that he ends up proposing to her. Until that point Bennett gets full access to the life of a man hopelessly unsuited for the cutthroat way of high society and she find out that beneath that laughable appearance is genuinely good guy. Needless to Bennett turns 180 degrees from writing demeaning gossip about Deeds (coining the label “Cinderella Man”) to regretting them bitterly as she falls in love with him as well.


Eventually Deeds finds out about Dawson/Bennett and piled on top of all the other harassment he has suffered since coming to town the revelation that the girl he loves is the very journalist who has been poisoning his life breaks him. He decides to give it all away to destitute farmers in a one-man land reform act worthy of the New Deal spirit.


While this is obviously a low point for Deeds and Bennett it is actually a highlight of the movie. With satirical bite Capra shows us the desperation this decision causes on the sycophants and vultures who thought they had a right to some of those money. Watching the lawyers panic is priceless. Here they thought they had found a money tree ripe for picking and the man is just giving it away!!! How rude! The very people who had been busy begging or demanding money of him are now offended that he actually do give it away, but not to them. No, instead of giving it to the sycophants he gives his fortune to thousands of people who actually need the money. How outrageous! The man must be insane.


And that is exactly what they try to claim in court. Normally I am not a fan of courtroom dramas. In fact I avoid them whenever possible. But this one is hilarious. Not just because of all the ridiculous claims and the common sense defense, but because of the hypocrisy so blatantly exposed in those parasites who now feel cheated of Deeds money.


Overall I found this installment very enjoyable. It is amusing, funny and witty all through. The characters are likable (and dislikable when needed) and we get just enough of a moral case here to make the movie a bit more than just a comedy.


The only item I can think of I did not care much for was Deeds urge to punch people in the face. Apparently that is a common enough feeling when people are getting just a bid too annoying, but to me it represents capitulation. When you cannot resolve a situation otherwise you can always resort to violence. Sorry dude, that does not look good.


Frankly I do not remember much of the Sandler version of the film, it is too long ago since I saw it, but maybe the fact that I do not remember much of it is telling. A few years after Capra made “Mr. Deeds Goes to Town” he tried for a remake in the shape “Mr. Smith Goes to Washington”. The crucial difference was that the universal story of solid common sense values against the depravity of wealth and fame was exchanged for a political point of honesty against moral corruption. Unfortunately this rather flag waving version was for me not so easy to swallow and I must say I much prefer Mr. Deeds.


As it is “Mr. Deeds Goes to Town” still works today, the points are universally valid and Gary Cooper is a great guy.
Posted by TSorensen at 13:17