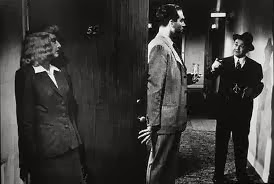 Kvinden Uden Samvittighed
I always find it difficult to watch movies that I know will end tragically. On an intellectual level they can and often are very pleasing, if for nothing else then because they are in clear minority to the happy ending films. But on a deeper level they trouble me. I suppose it is because I want to root for the characters even when they do not deserve it. Not to root for the characters is to be left floating, uninvolved in the film. But rooting for somebody and see them end in misery is just hard.


“Double Indemnity” is such a film. Do not get me wrong, it is a good film and I like it on many levels, but it is also a classic case of seeing your hero sink. It is not even a surprise. The final deroute is the very opening of the film. Walter Neff (Fred MacMurray) staggers into an office badly wounded and confess to a recording device that he is the bad guy and that this is the end. So, settled right there.


In a sense it helps. If I had not known of the crime he is about to commit I would probably have liked him even better. He is in fact the epitome of a good, upright can-do guy with both his legs solid on the ground and his wits with him. What brings him down is of course a dame. How could it be otherwise in a noir film? And not just any dame but Barbara Stanwyck in the shape of Phyllis Dietrichson. Stanwyck  made a good impression on me in her earlier films on the list, primarily because her acting is spot on. In “Double Indemnity” it took a while for me to warm up to her. She is supposed to be a seductress who sways Walter from his initial and scornful rejection to actually commit a murder and insurance fraud for her. That would take a lot of power to do that to a guy like Walter and I do not really see it from her. It might be the dowdy 1940’ies style or simply Stanwyck’s age, I do not know. She bags him a little too easy.


Later however, after the deed is done, Stanwyck steps into character. She is the cold and dangerous viper disguised as a fidgety nerve wreck of a woman and that role becomes her. She might not be a top seductress but she is an excellent viper.


In any case Phyllis manages to lure Walter, the insurance agent, into helping her rid herself of her husband and cash in on an accident insurance. Double up by making it a train accident, hence the title. Walter knows all the tricks from his vast professional experience and soon they have committed what they think is the perfect murder on her boisterous, but otherwise innocent husband.


Up to this point I actually managed to root for the guy. Not the dame, she reeks of danger and greed, but Walter, the happy insurance guy. Now I had to extricate myself from him and tell myself that I do not want to involve myself in a murderer.


Fortunately for me and the film in general we now get a third lead: The claims investigator and Walter’s friend Barton Keyes (Edward G. Robinson). Keyes is loud and funny and totally engaged in his job, which he seems to find to be the best job in the world. He is good at it with an instinct that almost makes him smell the foul claims. Edward G. Robinson shines in this role and he is easily the best character in the film. Not because he is the only clean guy, but because he is so engaging. His excitement is contagious as he sniffs out the bad claims and for Walter it must be really painful to see his friend get excited about the Dietriechson claim.


Besides being a story about solving a murder mystery with the murderer right in front of him it is also a love story between the two men. This is really extraordinary for a 1944 film under the Hays Code and while there are no sexual references it is clear from their act and talk that these two men care very much for each other. They are friends a bit beyond friends in a very subtle manner.


“Double Indemnity” is called a quintessential film noir because it can claim all the noir element. Fatal attraction, moral deroute and tons of darkness. That is all fine, but this film is a lot more than just style. It has three great actors and a knife sharp script. The lines come so fast that I sometimes had difficulty keeping up with them and with an edge to cut ice.


In a way that is also a problem with the film. The first third where Walter is getting seduced by Phyllis seems almost too scripted. The jabs and comebacks are the kind you wish you would have said later on but never something that would just spring to mind in an ordinary conversation. That and the out of the blue seduction is definitely the weakest part of the film.


The last part however with Walter and Phyllis feeling the soil burning under their feet is very strong. There is so much tension, sexual and psychological between the three of them that it just has to explode.


It is not my favorite noir, but it is good stuff and certainly worth watching.
Posted by TSorensen at 21:22