The Adventures of Prince Achmed (1926) 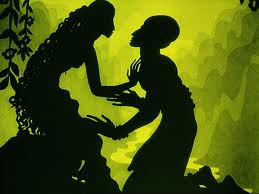 Die Abenteuer des Prinzen Achmed
”The Adventures of Prince Achmed”, or ”Die Abenteuer des Prinzen Achmed” as is the original title, is a stunning animated feature created more than a decade before Disney’s “Snowwhite and the Seven Dwarfs”. “Prince Achmed” is a silhouette puppet show as they are known particularly in the Far East but also in Europe in the 19th century before the cinema made this kind of projected shows old-fashioned. Except the characters here are not puppets controlled by a puppeteer with strings and sticks, but frame by frame animated silhouettes on a backlit and tinted surface. The effect is beautiful and quite stunning as these literal outlines take on a life of their own.


In simpler silhouette animation each character would just be a single cut-out being moved around on the background, but in “Prince Achmed” there are so many moving parts, even the individual fingers, that the artificial element, which of course is quite obvious given that we are taking black silhouettes, fades away and we have a true animated world.


The woman behind “Prince Achmed” was called Lotte Reiniger. She was a pioneer in this style of animation and with her team she worked 3 years to make this film. I am still wondering how she did it. The details are so many, the outlines on each silhouette so full of fine and delicate element that it must have been an insane job to cut them. The skirt of the princess and the cape of the prince both consist of latticework of minute detail. I can understand how you would do this on a computer but in the mid-twenties it was just you and a knife and a camera on a glowbox. The achievement is also highlighted by comparison with the later works of Lotte Reiniger also included on the DVD I got. None of them measures up to “Prince Achmed” in technical excellence.


The story of the film will inevitably take backseat to the technical achievement. Without knowing the background in full detail it seems to me that it is a medley of stories from “1001 night” combined into an adventurous journey. Our hero, the prince, inadvertently flies away from Bagdad on a magic flying horse belonging to a wicked sorcerer. Achmed gets the horse under control and finds a nice girl who unfortunately is guarded by some jealous demons in the wonderfully named country of Wak-Wak. They manage to get away only to be caught by the Emperor of China. Everything turns sour for Achmed who finds himself up against an emperor, a sorcerer and a bunch of demons. Fortunately he finds some allies namely a badass witch and a fellow called Aladdin who used to have a lamp of the more useful kind. The witch and Achmed help Aladdin get the lamp back and together they take on the sorcerer and free the girl and as a nice bonus Aladdin gets a magic castle and the princess, Achmed’s sister.


The adventure surely has all the elements of an exciting fairytale, but somewhere between the very two-dimensional world and the over the top fantastic elements the story itself loses its grip on me. I was not overly interested in this story. I was much more interested in the technical aspects and just kept wondering how on Earth she did it.


The original was lost in Berlin in 1945 as another casualty of a conflict that had nothing to do with the film, but fractions survived abroad and were pieced together in the reconstruction. The film came with an original score by composer Wolfgang Zeller, years before sound film, and that was added to the restored version. There is also a narrated version in English which I did not see. I felt that the version with the score would be closer to the original experience and it certainly fits very well.


“The Adventures of Prince Achmed” should first of all be seen for the technical and artistic achievement it is and that is really reason enough. I believe it deserves its newly acquired spot on The List.
Posted by TSorensen at 22:39