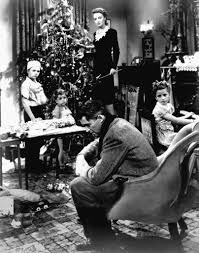 Det Er Herligt at Leve
It is no secret that I am a bit of an ignorant when it comes to classic movies. I freely admit it, but sometimes it apparently takes staggering proportions. When I started this project back in 2010 (partly to alleviate this gap in my general education) I tried to make my wife watch some of these movies with me. That was not a great success, but she did mention that an oldie she liked was “It’s a Wonderful Life”. I had never even heard of the movie. To say she was surprised is an understatement and I agreed to remedy this problem right away. So I saw this movie for the first time only a few years ago.

Before getting thrown out of town I have to mention that while this movie has been a Christmas staple in many countries for several generations it was never so in Denmark. There are the usual classics, but not this one. I cannot explain why, that is just how it is. So I feel excused. It does not change however that everybody and their mother know this movie by heart (apparently) so there is little point in referring the story.

Instead I will mention a few things that struck me watching it, first time and now this second time. My points may be a bit naïve because I do not have a history with this film, but sometimes there are advantages to that.

First thing is that I actually think it is quite a sad movie. I do like it, let me just say that for the record, but there is also something a bit depressive about it. Mainly because I feel terribly sorry for our George Bailey (James Stewart). He is a man with dreams for himself. He knows what he wants from life and he wants it badly, but again and again he is thwarted in getting that. Many people do not get what they want, that is the nature of life, but with George it seems so unfair. He could and should go travelling and get a college degree and pursue he own agenda but constantly other people need him and he has to sacrifice what he feels his life is about simply because he is a decent man and cannot let people down. Surprisingly he gets no or only little sympathy from family and friends and just to make things worse, his brother with no such heartfelt wishes, get all that and more. I know that the morale of the movie is that what he gets instead, a beautiful family and tons of friends, is the better deal, but I understand why he feels life is screwing him over. Not even a honeymoon will they let him have.

My feelings for George go a bit further than that. When things come to a head on Christmas Eve because Uncle Billy (Thomas Mitchell) in his absentmindedness loses 8000$ on the day the bank examiner shows up, George sees his life wash away. He is a broken man and I feel for him because I have been there myself. I am no George Bailey, but around Christmas two years ago my life was in similar disarray because of an economic issue and I fear my relation to my family was not so different from George’s. My angel was not Clarence (Henry Travers), but my boss at the office and I definitely got to see life in a different light. When George yells at his wife and children I feel his pain I think more than most. Is there anything worse than Christmas hubbub when your life is falling apart?

Another observation is that there is a political message in the film that is not unfamiliar today. George Bailey runs the “Building and Loan”, a small bank/mortgage institution who offers mortgages to people with little or no collateral. Before the financial crisis those institutions would gladly finance anything and anybody, but since then things have become much different. In Denmark there are entire regions where you cannot get a mortgage at all because those institutions consider the prospects of selling the house again too poor. This of course makes it difficult to sell a house in the first place and so they basically ruin those regions. From this movie and others (“The Best Years of Our Lives” for instance) I get the impression that the post-war situation was quite similar. It takes small banks like “The Building and Loan” who work locally to break that spiral and lift a town. I think there are some financial institutions and maybe politicians who would benefit from watching “It’s a Wonderful Life”. Of course you could also turn it around and say that such a small and local bank is too vulnerable to losses. I doubt an Uncle Billy could close a major bank.

It struck me this time round that other movies have borrowed heavily from “It’s a Wonderful Life”. I am thinking specifically of one of my personal favorite franchises “Back to the Future”. The experience Marty McFly gets when he arrives in the “present” of what happens to his town if a certain element was changed in the past is eerily similar to the tour George Bailey gets. The casinos of course, but that scene on the cemetery is almost a direct copy. So “It’s a Wonderful Life” has effectively introduced a classic time travel trope. Who would have guessed?

I should say a bit about the movie in general. I liked it more second time than first time, maybe because it struck a chord with me this time, but also because I felt able to see through the thick layer of “Capra-corn” I felt loaded the movie the first time. This is not just a movie about how important family is and all those classic and conservative values. There is a heart and a soul in it. Something about that being generous of mind and action is indeed worthwhile. The religious element is actually toned down. He is not getting 8000$ from Heaven and he is not getting a meaningless “pray-and-things-will-workout”. The angel is just an agent to make him reconsider his life and that is actually quite elegantly done. I think the message is human decency and maybe a reminder to not let your finances depend on a guy who does not even remember why he put those knots on his fingers.