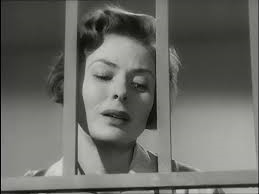 Størst Af Alt Er Kærligheden
For a short while I am escaping 1949 with a jump to the distant future of 1952 in order to review Roberto Rosellini’s Europa ’51. I picked it for the blog club (yes, I admit it) so there was no way around it. Frankly I had no idea what I was picking, it was a totally random pick with the only criteria that it should be a movie I had never heard of. In this period that excludes very few movies.

Half an hour into the movie I was groaning over this pick. What was this? But then, slowly and discretely, the movie turned around and became one of the most beautiful stories I have watched in a long time. I am not ashamed to admit that I was crying helplessly at the end. So, yeah, this is a good one.

The reason for my dislike in the beginning is quite intentional from Rossellini’s side. We meet a rich Italian (with American and possibly Nordic ties) family consisting of mother Irene Girard (Ingrid Bergman), father George Girard (Alexander Knox) and son Michele (Sandro Franchina). Irene and George enjoy the social life, have a pile of servants and private tutors for Michele. In fact they are so busy with themselves that they have no time or care for anybody else including their own son. That is made painfully clear when Irene flatly ignores her son’s pleas for attention and her exasperation when he interrupts a social event the parent are having for friends. Even a gift for the son is a routine event on autopilot with no actual interest in it from anybody. I think a dog would normally get more attention and love than this poor boy who is clearly an accessory more than anything else. I dislike the parents obviously and especially Irene and hence my disgust with the movie.

Then something happens. The boy attempts suicide and incidentally dies. This is a major wake up call for Irene (and flatly ignored by George), but not in the expected way. Irene realize that she is (correctly) to blame for the loss of her son and she hates herself for it. She is until near the end of the film unable to put it into words, but she feels an emptiness in herself beyond the loss of he son. Her life, social status, relation to others, it is all wrong and she wants to change into the direct opposite and reach out others. She needs to help and feel a strong desire to love other people.

Driven by this urge she jumps at opportunities to help those in need of help. Her gratification is to some extent to see the joy she brings, but mostly it is a way to fight her inner demons. She helps a poor family with medicine, she find a job for a single mother with 6 children and even stands in for her the first days at the factory. She stays at the bedside of a prostitute with tuberculosis and when the older son of the poor family gets involved in an armed robbery she manages to disarm the situation and save the family.

All this behavior is looked at with distrust and disbelief by her own family. Has she gone crazy? Is she a communist like her relative, Andrea? Does she have a lover? Lawyers, priests and doctors cannot place such strange behavior. She claims she is no communist, she is not driven by religious zeal, and there is no element of apparent personal gain for her. It is entirely inexplicable. There is simply nothing to do but sending her to a mental hospital and lock her up until this craziness wears off.

The point is of course that the modern world with its class structure, science and institutionalized religion simply has no room or even understanding for altruistic behavior and the idea of loving someone else without expecting anything in return. Such a story is seen before and later in numerous versions and is in itself a story built on Franz of Assisi, the founder of the Franciscan order of monks, but I cannot remember ever seeing it as elegantly told as here. There is no mystery, no divine element or revolutionary happening. It is just a woman who given the opportunity will step in and help people because she cares about them and because she desperately do not want to be the person she used to be.

The poignancy is knife sharp and near the end it is also threatening to tip over, but it is the built up itself that saves it. I believe the people who loves her and I believe that she thinks they have saved her and this is why I cannot stop crying, even writing this. Goddammit it works so brutally well! Forget about Von Trier’s “Dancer in the Dark” or Capra’s “Mr. Deed Goes to Town”. Europa ’51 is the real thing.

Back on the ground I must admit that I had some trouble accepting Bergman as Irene. Oh, she is a brilliant actor, but hearing her talk Italian in a dubbed voice is just not right. I am a die-hard opponent of dubbing for a number of reasons, but mostly because this is not the actor talking. Why anybody as an audience will accept dubbing is beyond me and this is most certainly not Ingrid Bergman’s voice. In this case the movie is so good that eventually I was able to ignore this, but I needed to get it out of the system.

All in all Italian cinema keeps on impressing me and no doubt there is more good stuff in store for me.