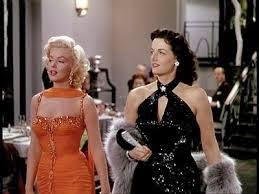 Gentlemen Foretrækker Blondiner
There are two very good reasons to watch and like ”Gentlemen Prefer Blondes”. They are called Jane Russell and Marylyn Monroe.


I have arrived at one of the true classics of the mid-fifties and while I actually have not seen it before it is one of those movie most people (myself included) know of. The song “Diamonds are a Girl’s Best Friend” has been referenced so often that is has become synonymous with Marilyn Monroe and is used by anybody (like Madonna) who wants to reference her. My guess is that fewer people have actually watched the movie and that is a shame because “Gentlemen Prefers Blondes” is a glorious celebration of the musical comedy genre. There is a lot to love in this movie, also beyond the two above mentioned ladies.


Dorothy (Jane Russell) and Lorelei (Marilyn Monroe) are fast friends, what in today’s pop culture would be called BFFs, despite in many ways being each other’s opposites. Dorothy presents a strong woman, not unlike the type we saw in “The Paleface”. She speaks her mind and go for what she wants, which is sex. Dorothy is practical and honest and prefers love (well, sex actually) to wealth. She is the woman who is “on top” if you take my meaning.


For Lorelei the objective is also men, but not sex. Sex is just the tool she employs to obtain her real target: wealth. She has the looks of a bombshell, a bed chamber voice that promises anything but sleeping and the appearance of a stupid silly girl. But underneath that silly façade she is cunning and calculated and every bit as practical as Dorothy.


The two of them are show girls headed for France where Lorelei is supposed to get married to her millionaire friend and they are not idle. Dorothy is courting half the ship including the American Olympic team and Lorelei has found a rich old (married!) man, with the fitting nickname Piggy (Charles Coburn) who happen to own a diamond mine in Africa. And diamonds is such an aphrodisiac…


This is a happy and funny musical so we know that we are just supposed to enjoy ourselves and not worry too much about drama and realism and that works fine for me. There is so much to look at, so many great lines and genuinely funny gags that I for one had a great time watching this. The idea of these two man-hunters on the prowl is great and what could have been pathetic is rendered charming and fun by the actresses. There is something seedy about their attitude and outlook, but it is part of the charm of the movie. This is the 1950’ies. The ambition of women in this time is still linked to men: Want to make a fortune? Marry wealth. Your assets? Your looks and wit to entice men. It is sad, I know, but given this premise here are two girls out to get what they want and they are not afraid to go for it.


Everything in this musical centers on Russell and Monroe and good for that. They are in a word great. At first Monroe seems to outshine Russell, which is remarkable all on its own. She only has to talk in that bed room whisper and you know where Monroe’s reputation comes from. I cannot remember anybody pre-53 as sexually loaded as Monroe in that style. No wonder the marks in the movie, including her pet millionaires, are defenseless against her.


Russell however gets her comeback on the boat. As she goes around among the Olympic team, singing “Ain’t There Anyone Here for Love” she looks like nothing so much as a fox among chickens. I was thinking of a girl in a candy store, but Dorothy is a predator and the way she look at those sporty, half naked men is anything but childish. Her two tennis rackets might just as well have been two revolvers.


Speaking of songs, this movie is littered with great ones. The climax of course is “Diamonds are a girl’s best friend”, the song that made Monroe a star, but every one of them are good. In that sense I feel as spoiled as I did in “Singing in the Rain”.


But what really won me over is the joy and genuine fun that permeates every scene. I smiled all the way through except when I laughed. Lorelei running circles around Piggy, Dorothy trying to knock some sense into Lorelei, their mad scheming to get sex and diamonds respectively and, the glorious moment when the fabulously rich Henry Spofford III turns out to be a child. That reveal at the dinner table was priceless.


If there was anything negative to say about the movie it is that the supporting cast is about as weak as the leads are great. Nobody but Coburn were really worth a mention and George Winslow as the child billionaire is outright miscast (or fed idiotic lines or both). However it detracts very little from the overall impression. This is all about Russell and Monroe, they are great and that is all that matters.


Sex in the fifties? Look no further.