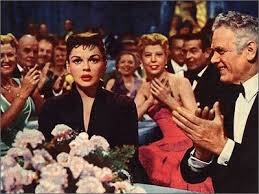 I have said it before and I know I will say it again: 1954 was an awesome year in movies. Today’s movie “A Star is Born” is only confirmation of that statement. This is a very impressive musical on practically every level and it ranks very high on my list of best musicals. To be fair that list is not exactly crowded, but after “Seven Brides for Seven Brothers” this marks a return to musicals that respect its audience.

“A Star is Born” is something of a revolution in musicals because it breaks with so many musical tropes to the extent that you can argue that it is not even a real musical, but a drama with music. George Cukor, the director, may have something to do with that. He had been around in Hollywood since forever and had done practically everything except perhaps musicals. “A Star is Born” is a progressive story that leaves opportunities for music where it is natural and integral to the story. There are no spontaneously breaking out in song scenes and backing music is a record playing or an orchestra actually there. I am not a puritan when it comes to these things, but watching the music integrated so well makes me wonder how I could stand all those musicals who insists on breaking the contract with the audience and leave the reality of the film while their songs last.

It is telling that the male lead never sings. When did you last see that in a musical? I should probably be grateful that James Mason only talks (something he is truly good at) and leave the singing to Judy Garland, but it shows that the drama element here is just as important as the music and that really makes the difference between a movie and filmed music (disregarding dancing which I do not care much about).

The drama is a classic Hollywood story about the ascent of a star, but it is also the story of the deroute of a star and a scathing portray of the cynicism of the Hollywood media machine. This gives a balance of sweetness and bitterness with a dash of relevance and like cooking balance is everything.
Judy Garland is Esther Blodgett, a singer with a band who happens to save the famous movie star Norman Maine (James Mason) from making an absolute fool of himself at a benefit. Sobered up he sets out to find the girl and find out she has a magic voice. He convinces her to quit the band and go to the movies, but starts out by burning her when he gets drunk and is drawn out to a set to film for weeks.

Eventually he finds her again and becomes her mentor in Hollywood and, of course in this sort of movies, her husband. Esther soon becomes Vicki Lester and a star on the rise while Norman heads the other way into the abyss of substance abuse.

I do not particularly enjoy watching people hit the gutter, especially when they cause it to themselves and so I am not a fan of substance abuse films. “A Star is Born” manages to incorporate this tragedy in a way where there is no doubt of its seriousness, but it is not allowed to steal the picture. Again “balance” is the word. This could have been unbearable or it could have been laughed off, but Cukor avoids both ditches. I found it hilariously funny when Norman crashes the show at the benefit, but there is nothing funny about his later crash at the Academy Awards. That is an ice cold picture of a pathetic alcoholic crying for help. Norman resolves the situation in a way that is not exactly optimistic, but at least holds some dignity and that is a good note to finish on.

There is a long tradition for self-reflection in movies. Movies about movies or at least with a setting around moviemaking. The special thing about “A Star is Born” is how close we get and how cynical that portrait is. We have the scene where Esther is repeatedly told how happy they are to have her with them although nobody is actually listening to her or even recognizes her. There is the Matt Libby (Jack Carson) character who as a public relations guy thinks only of actors as assets and treats them as such. Or the way Norman Maine is allowed to flounder until suddenly as by common decision he is cut out. It is not a very friendly picture. But then on the other side it is also about glamour and dreams and real achievements, so again, the movie keeps a good balance.

As Judy Garland is essentially the only singer in this musical a lot stand and falls with her performance and no amount of drama or framing can change that. She is good and she got excellent material to work with. Early on we get “The Man That Got Away” and that hits the mark on so many levels for me. This is exactly the kind of music I like. Unfortunately the rest of the set cannot match that jazzy cool, but less can also do it. Garland does well, even in the dance routines and often I am reminded of how much she looks like her daughter. On the acting side I am less impressed by Garland. I know her character is very emotional and lacking self-esteem, but Garland over-does it, especially in those scenes where she is crying. It looks forced. Fortunately Mason is such a standout performer that he outweighs Garland’s deficiencies. Oh man, I can listen to Mason for hours, that voice is honey for the ears.

I got the impression that “A Star is Born” was considered the movie of the year in 54 with expectations of a big harvest at the Academy Award, but although it was awarded in numerous categories it won none. That is not because this was an overrated movie, but a testament to the strength of the field this year.

If “A Star is Born” heralds a new era for musicals I am all in. This feels right, all three hours.