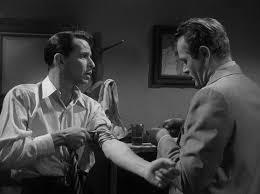 The Man with the Golden Arm
A fitting subtitle for this movie could be “Trainspotting in 1955”.


In the Danish edition of the List that I follow two 1955 movies are missing.  Whether they were removed to make room for the special Danish entries or additions from the grand 10th edition revision I have not yet worked out, but suffice to say that they were not deemed worthy for the edition I hold. I have arrived at the first of these, “The Man with the Golden Arm” (the other is “Oklahoma!”).


The obvious first question is if there is a reason this should be a leftover movie. Well, both yes and no (ambiguous is my middle name…), this movie has strengths and qualities that warrant the inclusion, but it is also a terribly difficult movie to watch and not something I would like to see again.


The thing about “The Man with the Golden Arm” is that it is a substance abuse movie and they are by definition difficult. I am not a fan of those and I do think it takes a measure of masochism to enjoy them that I do not possess. That is not to say that they have no value, not at all. I suppose they are important and that people should know of the problems with substance abuse, but they feel like torment to me and I take little pleasure in them.


This time the substance in question is heroin, or something very similar (for some reason the drug is never named, but the description fits all too well on heroin) and I believe that is a first. That makes “The Man with the Golden Arm” to heroin what “Lost Weekend” was to alcohol.


Frank Sinatra (yes, the one and only) is Frankie “Dealer” Machine. At the opening of the movie he is returning from a rehab prison where he has been cured of heroin addiction and learned to be a drummer. Things are looking up for Frankie who is ready for a fresh start on life.


However everybody and their mother is hell bent on sabotaging things for Frankie and drag him into the gutter. With friends like these Frankie need no enemies. There are almost too many to list.


His friend Sparrow (Arnold Stang) is a hustler who is quick to get him in trouble for wearing a stolen suit. Zero Schwiefka (Robert Strauss) runs a gambling racket and want his best dealer, Frankie, back on the job. “Nifty Louie” is a heroin dealer constantly tempting Frankie with a fix and worst of all is Frankie’s wife Zosh (Eleanor Parker).


Zosh is almost (but probably) psychotic in her need to keep Frankie on a leash. She is faking paralysis, for which Frankie married her out of guilt for having caused it, in order to keep him around and she is strongly opposed to him becoming a drummer. Instead she want him back dealing cards so he can take care of her and will not go anywhere. She is insanely jealous and see herself victimized in all things with no sympathy left for Frankie. Truly a one-way marriage.


Faced with pressure from all sides Frankie eventually crumples. He is back dealing cards and taking drugs and when he finally gets a drum audition he is in no shape to perform.


It is a painful deroute. The pressure Frankie is under is immense and unfair so there is some sympathy for his desperation. Still, we know going back on drugs is the wrong solution and watching him succumb is just terrible. Frankie has one person willing to support him, Molly (Kim Novak), an old flame, but when he finally gives in it becomes too much for her and she walks out on him. That is the absolute low point of the movie.


There is redemption in the end though. Frankie seeks help from Molly and together they face up to the addiction. Frankie is locked up in a room taking a cold turkey in a scene that was essentially copied in “Trainspotting”. In addition we get a little murder mystery that propels the resolution, and freed of all ties Frankie makes the obvious decision to start all over in a new place with new people, something he should have done to begin with.


It was so hard watching this one that I had to chop it up in small pieces to get through it and still there were times when I just did not feel like watching anymore. Drug addiction is just such a horrible theme and this movie goes a long way to show how powerless its victims are in fighting it. We now Frankie has to get knocked down before the resolution and that premise almost kills the movie. I would have supposed a 1955 movie would have been gentler with its audience, but Preminger pulls no punches. Frankie (and us, the audience) gets it right in the face every time.


It is odd to watch Frank Sinatra as a junkie. There is no singing or dancing, only misery and desperation and it is true reminder that Sinatra was more than a crooner, that he was in fact a talented actor. He is likable and that is part of the frustration. Why cannot he see that all these so-called friends will him no good?


The jazzy Bernstein score is highlighted as an asset of the movie. That is possible. I almost did not hear it. That may be a good thing, blending in so seamlessly with the movie that it supports it, but does not stand out. I feel a bit cheated though. I really like jazz.


A well-done drug addiction movie featuring Frank Sinatra is probably a must-see. For me it is a been there – done that – don’t want to go back.
Posted by TSorensen at 14:30