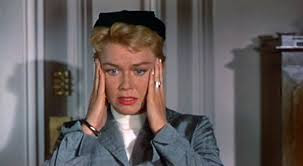 Manden der vidste for meget
As I progress through the list it happens with increasing frequency that I encounter movies I have previously watched. This is usually because they are classics and so I do not mind the re-watch. That is certainly the case of today’s film “The Man Who Knew Too Much”. I even think I have watched it multiple times, but last time (before this one) must have been at least a decade ago and I found I had forgotten more than I remembered, which mostly amounted to the Moroccan restaurant scene and the lost child theme.


It was such a joy to watch it again and I feel I can finally appreciate it for the great achievement it is. I will be much surprised if this will not be among my top watches of 1956.


Most readers of this blog will recognize the movie immediately. If you do not the only explanation I can see is that you, like me, insist on doing the List chronologically and so have saved this one for some time in the distant future. You will know that this is of course Alfred Hitchcock and that it belongs to his golden period, the time where Hitch could do nothing wrong. A presentation of the story is therefore deeply unnecessary. Instead I would like to talk about all the things I love about this picture.


First of all there is the format of the story. It takes us along on a journey with the McKenna’s (James Stewart, Doris Day and Christopher Olsen as their son Hank) from Morocco to London and from unconcerned leisure to anxiety, suspense and finally release. It is almost Indiana Jones as we get around, meeting strange characters and odd places and I love it. It is going too far to say we have character development, but these fairly ordinary people (who are as a matter of fact not so ordinary) takes a ride on the emotional rollercoaster and we see them from all angles as they deal with the crisis. Maybe I am not so taken by Jimmy Stewarts Dr. Ben, he is a little too aggressive and self-satisfied in a small town sort of way for my taste, but Doris Day is amazing and she reveals sides of herself you may not expect at the opening.


Secondly I am very impressed with the sets. It would have been easy to just stay at home and build everything in the studio, but so much of the film is made on location, both in Marrakesh and in London. This is a real market in Marrakesh and this is most certainly the Royal Albert Hall in London. The authenticity this lends to the movie is immense and you can tell that every scene is though through in every detail.


This would not be a Hitchcock movie however if the suspense element was not central to the production. I doubt there is ever any question that we are in for a happy end, but that does not ruin it one bit. Suspense is build up slowly with small odd happenings, remarks, people throwing glances, until the McKenna’s are finally convinced that something fishy is going on and when suddenly a French agent in native disguise dies in Ben McKenna’s arms they are thrown into the deep end and their world is turned upside down. Of course with their child missing they are facing any parent’s worst nightmare and that means that anybody and everybody are potentially dangerous to them. I doubt they really care that some statesman’s life is at stake. To them it is all about getting to their boy without endangering his life and that means keeping the police out of it as long as possible. It is logical that their situation is suspense in itself, but Hitch plays the theme again and again in different variations interspersed with relief breaks, almost funny, but not enough to break the spell. The scenes in the Royal Albert Hall are famous and for good reason, but my favorite scene for suspense is when the McKenna’s walk in to the Chapel in the middle of service and stand there in the back while the kidnappers are performing the service. Not much is said verbally, but the eyes, oh dear, they speak volumes.


Hitch clearly knew his way around London and I think he took a special joy in presenting the American couple as fishes out of the water here, maybe payback for his own life in America, but there is also some zeitgeist in Americans coming to England to fix things. The interesting thing here is that this is actually a remake of Hitchcock’s own film from 34 (which I have not seen) so this is either a new element or something already incorporated in the prewar setting.


A final element I have to mention is the music. The score have two prominent themes and I cannot decide which is the more striking. The climax in the Royal Albert Hall is totally submerged into a magnificent rendition of Arthur Benjamins’s “Storm Clouds Cantata”. It is firing on all cylinders with symphonic orchestra and a massive choir and just begs to be experienced in a modern theater with a top notch sound system. The other is Doris Day singing “Que Sera, Sera”, which is a lot more subdued, but not less gripping. Of course this song became a monster hit and so has long since entered pop culture history as one of those songs everybody knows. Incidentally it also gave “The Man Who Knew Too Much” its only Oscar.


Was this the best Hitchcock ever? I think I will leave that decision until I have covered all his entries, but for me this is definitely top tier along with “Rear Window”, “North by Northwest” and “Vertigo”.