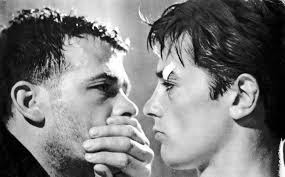 1960 starts off with an Italian movie, which is symptomatic for this year. As far as I can see there are four Italian movies on the List for 1960, so either Italian cinema went through a golden age or the general level was rather poor. As this is my first movie of the year that has yet to be decided. That is still the case after watching “Rocco and His Brothers”.
Luchino Visconti’s movie borrows into neorealist tradition by taking its departure in real and relevant issues, notably the migration of poor south-Italians to the prosperous northern Italy, but adds drama, almost melodrama to the story, which helps alleviate the dullness often associated with neorealism, but, in my opinion, it probably gets too much of that. Visconti uses the story of the everyday struggle to demonstrate some larger, philosophical issues and, as is often the case with such agenda’s, almost overplays his cards to make his points.

A discussion of the movie will be full of spoilers, so a warning right away, this review is aimed at those who have already seen it. There be spoilers ahead. For that reason I will also dispense with the summary as you will already know the story.

The movie centers on the Parondi family, consisting of five brothers and their mother. Each brother and the mother represents a value or property that is relevant for Italians. Combined they (may) represent the different directions Italy can take, though that may be a stretch. Their migration from south to north is both a very real window into a persistent issue in Italy (North versus South and internal migration) but also a journey from the past to the future.

The mother (Katina Paxinou) represents family, family at all costs. For her her family is everything. She defines her life as the matriarch of the five brother family and her prerogative is to keep the family united. What the brothers do or want is unimportant as long as they stay in the family and support the idea of a close knit family. The break-up of her family is her constant worry and when she cries and screams it is not for her sons, but what her sons do to the coherence of her family. All independence is evil. And she screams a lot! Twenty minutes in I had enough and with a sinking heart realized there was another two and a half hours to go.

Vincenzo (Spiros Focás) represents new family and is therefore a threat to the existing family. He is the first one to go to Milano and is already in the process of forming his own family when the rest of the lot shows up. The mother barges in and expects to join the party and is at once at odds with the bride-to-be’s family who will have none of that. Vincenzo has to choose and choses at first stay with his old family, but drifts back to that new family he wants to make. This is a cause of conflict with the mother.

Simone (Renato Salvatori) is a brute, a smartass who tricks or bully people to get what he wants. His motives are strictly egocentric and narcissistic and represents another classic Italian type. Visconti lets him fly high and crash, clearly letting us know that this attitude has severe consequences. Dramatically he is the bad guy causing trouble and exploiting the gullible. To the mother all that does not matter. It is a much bigger concern that he is being ostracized by the other brothers and therefore excluded from the family and he is hanging around with a prostitute, damaging the reputation of the family. When he finally kills the girl the mother cries not for the murder, but for the loss of her son.

Rocco (Alain Delon) is a saint. Everything he does is motivated by doing good and sacrifice himself in the process. This is particularly the case with Simone. Simone does what he can to exploit and dominate Rocco and in return Rocco forgives him everything and does all in his power and more to help Simone. Yet every time Rocco makes a sacrifice there is a backlash and good intent have terrible consequences. A case in point is the prostitute Nadia (Annie Girardot). She is revitalized by Rocco’s attention, but when Simone rapes her as punishment Rocco orders Nadia to return to Simone to help him because he thinks Simone needs her. The rape and being treated like an item that can be possessed and given away destroys Nadia and Simone is only the worse for her attention. Is this the Italian concept of Furbo and Fesso?

Ciro (Max Cartier) represents realism. He embraces the future, takes an education and gets a good job. He is also the one who both realizes Rocco’s sainthood and Simone’s evil and advocates practical and sensible solutions. Yet this is also a threat to the family-at-all-cost. Ciro is not about forgiving as Rocco and the mother but a mechanic or a doctor who fixes things, and who in a traditionalist world would be burned on the stake. Maybe he represents Italy’s painful transition into modernity.

Luca (Rocco Vidolazzi) is the future. He is much younger than the other four brothers and has yet to decide his path. Which of his four brothers will he follow?

From a northern perspective the conflict in the movie can feel alien. The mother’s family at all cost is way too much, but is also very much reality in the Mediterranean context. The same is the brute and saint of Simone and Rocco and my guess is that an Italian watching this movie will get a lot more out of this relationship.

For these reasons I had the feeling that this movie was not really aimed at me. I appreciate what Visconti was trying to do here, but from outside the cultural context it loses quite a bit of its bite and if you add to that my aversion for Italian screaming I end up being on the fence. The middle part was good, but the beginning and the end was too over the top for me.
Posted by TSorensen at 22:09