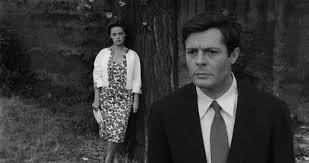 ”La Notte” is the second installment in Michelangelo Antonioni trilogy, the first being L'Avventura, which I reviewed a few months ago.

Antonioni here continues in a similar vein with a movie with very little in terms of apparent plot. Like in L’Avventura we are simply following some people over a very short time span who are doing… something. That sounds frustrating and that was how I felt with the first movie. However I think I am slowly getting tuned in to the kind of movies Antonioni makes and this time I found it much easier to cope with movie. I would even go so far as to say that I liked it.

I think the clue is to see the movie as a tableau or simply a portrait, in this case of two adult people and their marriage. In the span of the two hours the movie lasts or the approximately 24 hours covered by the movie we get a very close, yet incredibly subtle, peek at Lidia Pontano (Jeanne Moreau) and Giovanni Pontano (Marcello Mastroianni). I would estimate their age to around 40 and it is clear that both of them has reached the panic age, where they are reconsidering their lives. Giovanni is an intellectual author who is successful with a book and apparently a social A-lister. He cares for and admires his wife, but there is no spark of passion and he feels an emptiness in his life. Lidia was born into money and she does… nothing really. They have no children and her life assignment seems to be to trail along with her husband. She feels the emptiness even more that Giovanni, both in terms of her function in life and in terms of the lack of apparent love in their relationship.

It is this search for content and meaning that is at the heart of “La Notte”.

In the opening scenes Lidia and Giovanni are visiting a friend Tommaso (Bernhard Wicki) at the hospital. Tommaso is a close friend of Giovanni and an even closer friend of Lidia as we learn in the end. Tommaso is dying and it seems to trigger something in both of them. Giovanni is letting himself get seduced by another patient and Lidia leaves the hospital entirely and later wanders off in an old neighborhood they used to live in, clearly looking for something she lost.

There is something very aimless and confused about both of them, as if they have lost direction. What they really have lost seems to be something from each other. This becomes very clear at the big and sumptuous party at the rich Gherardini villa. Among all these happy revelers Lidia and Giovanni look entirely out of place, both literally and metaphorically. None of them are content with a superficial life, but they are trapped in it and cannot get out.

Reading this synopsis, it sounds like a dull and depressing movie, but it is surprisingly interesting and it only really becomes depressing when we realize how lonely these two people are.

The movie seems to hint that their lack of direction has something to do with the superficial life with the rich and famous, but to me it is as if they are sharing too little. A few children would change everything, but that never enters their lives. Instead they are full of their own needs with little concern for those of the other one.

Monica Vitti is back as Gherardini’s daughter, an apparently younger version of Lidia.

This is not exactly a Sunday afternoon flick, but a surprisingly interesting movie full of insight. I wonder if I should take another look at L'Avventura.
Posted by TSorensen at 07:49