The Gospel According to St. Matthew (Il Vangelo Secondo Matteo) (1964) 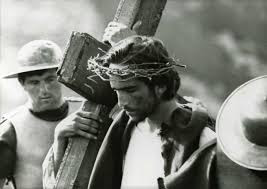 
When it comes to movie versions of religious texts a lot of the usual criteria for evaluating a movie become invalid. A religious topic, especially if it is THE religious texts that are being used cannot really be rated as a good or a bad story. If you are religious, you would rate it according to how well it matches your religious believes. If you are not religious such a story would be so far outside your version of reality that you are not in a position to rate it.

This is how I feel about “The Gospel According to Saint Matthew” (“Il vangelo secondo Matteo”) by Pier Paolo Pasolini. I very much belong to the second group and whether this is a good rendition of the gospels I will leave to religious people.

What I can say is that Pasolini here went, as far as I can see, for a very literal presentation of the life and death of Jesus. There are hardly any surprises, it is all taken from the text. Even the lines seem to be direct biblical quotes. Something that at times sounds very odd as those lines do not work particular well in a normal dialogue. Many scenes are set up particularly so specific lines can be spoken rather than to serve any progressive story. This means that the slavic adherence to the text makes the movie lumber along rather erratically.

I have not watched many religious movies, but of the few I have seen those that work the best are usually those that take their own spin on the story, have a certain angle or dramatize events. Pasolini however seems content to just visualize the story and so there are absolutely no surprises or originality here.

Where this version is supposed to stand out is in Pasolini’s application of Italian neorealism to the telling of the story with his use amateur actors and natural locations. At least this is how Wikipedia describes it. I have a hard time seeing that. There is very little that seem natural here. Indeed there is a staged feel to the production that is anything but natural. Characters are not fleshed out and there is absolutely no spontaneity in the dialogue. If this is realism then something has happened since Rossellini.

Then again, if you are really into the religious text you would probably appreciate this strict adherence to the scriptures. It is a particular quality for this type of movie.

I doubt that I have to recount the story itself. It starts with the impregnation of the Virgin Maria and ends with the Resurrection of Christ. Everything in between is well known.

The film was filmed in Calabria in Italy and as I actually live in Israel right now I can see where these look like the real locations and where they decidedly do not. I suppose for the average viewer the match is good enough, but I find it a bit comical at times.

Pier Paolo Pasolini has a reputation of being an avantgarde director with many inaccessible or outright disgusting movies under his belt. My own experience with his movies is very limited, but I find odd that the director of “120 days of Sodom” should also have made this very conventional movie about the life of Jesus. I must say that I expected something else.

On an entirely different note, it is now official that my family and I are moving back to Denmark in July after six years in Israel. We are going to live in Copenhagen and the next month and a half is going to be pretty chaotic. My posting frequency will likely reach an all-time low in this period, but once established in our new apartment I hope to get back to normal speed.