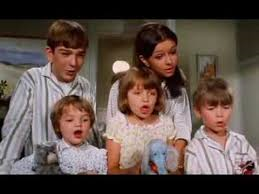 Off-List: Min søsters børn
As mentioned in an earlier post I am allowing myself to add three movies each year and one of these has to be a Danish movie. This particular last rule I initiated for 1965 and already now I am starting to regret it. Danish movies vary greatly in quality and my pick for 1966 is… not impressive.


There is in Denmark a long tradition for family comedies. The kind of movies you grow up with as a child and that the entire family enjoy going to the cinema to watch. I am certain this is not just a Danish phenomenon, but for many years these movies carried the torch in Danish cinema. It was a tradition that took off for real in the sixties and my pick for 1966 “Min søsters børn” (loosely translates into “My Sisters Children”, but I am not at all certain this movie has an English title) belonged to that wave. It started a series of four installment and was much later (2001-2013) remade with another six episodes. I think it is fair to say that it would be hard to find a Dane regardless of age who would not be familiar with this series.


The plot is fairly simple. Erik Lund (Axel Strøbye) is a bachelor academician in children psychology about to defend his doctorate for which he has to pay a visit in Copenhagen. This coincides with his sister and her husband going abroad on a vacation alone, leaving house and children to uncle Erik. He can stay there an take care of house and children while he is in town anyway.


Very soon it becomes clear that Erik is all theory and has no actual experience in raising children. The children are running corners on him and he has his hands full. Or this is how I remember this series. As the movie progresses Erik finds himself repeatedly in situations that his neighbor (Karl Stegger) construe as a crime of some sort prompting him to call the police. And every time the children are saving his butt by providing the information that makes the police drop the charges. The shenanigans of the children are actually very subdued and reduced to annoying voices and capturing a girl for their uncle.


And therein lies the trouble. This first movie is just way too passive, too sweet and not funny. The setups that are supposed to generate the laughter barely makes me smile and the children never really challenges their uncle or the viewer. It is just uncle Erik challenging himself. For a comedy that is just too thin or maybe the jaded viewer in 2018 expects a lot more.


But, I can live with that. My son liked the movie, to my great surprise, so there is that. The real problem here is the morale of the story.


Erik is exponent of modern children psychology and with a few modifications his ideas are actually how you would look at this topic today. The movie, however, decides to make fool of these ideas as high-brow nonsense and instead advocate old-school discipline including corporal punishment. Only when Uncle raise his voice, curse the children and threaten to slap their butts has he “learned how to raise children” and the children happily agree.


I would not add this movie to the List, not even a Danish version of the list, but the modern installments are actually watchable, and we have enjoyed some of them in the past. It is telling that my wife, who is a bit of a fan, walked out on this one halfway through.


Cultural significance, yes. Recommendation, no
Posted by TSorensen at 22:16