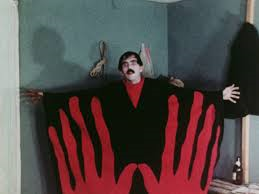 Off-List: Manos, The Hands of Fate
The motivation for the “1001 Movies You Must See Before You Die” list is to provide a canon of movies you just must see. It is clearly stated that these are not necessarily the best or highest grossing movies. The quality is measured in terms of being significant in some way or another and that may have nothing to do with actual quality as you would normally understand it. There are plenty of movies on the List that demonstrate that. A “quality” that seems to have been overlooked is the extreme lack of quality. A movie that is so bad that it is in itself an achievement is in my opinion a significant film that you simply have to have watched.


Here my good friend Bea at Flickers in Time has been most helpful providing a suitable candidate in “Manos: The Hands of Fate” and this will be my third off-list movie for 1966.


Let me say right off the bat that this is an incredible film. It is very clear that it was not intended as a spoof or a joke, they meant it when the team behind made this movie, yet they have managed to do just about everything wrong. Very wrong. Several lists name it one of the worst movies ever and a score on IMDB of 1.9 speaks for itself. It is so bad a score it is quite an achievement.


The plot, because, yes, there is actually a plot (at which point it is actually better than some movies on the List), is revolving around a family of three, Michael (Harold P. Warren), Margaret (Diane Mahree) and their daughter Debbie (Jackey Neyman) who is out driving but get lost in the desert. They end up at a mysterious house to ask for directions but end up staying there.


At the house they are greeted by Torgo (John Reynolds), a cripple who claims to be a servant of a guy he refers to as Master. Master is a Dracula kind of guy, lying in a crypt surrounded by still women in white dresses. Once he wakes up it becomes apparent that he worships a demon called Manos and sports a ridiculous moustache.


Michael and Margaret keeps going in an out, consistently making wrong and stupid decisions. Margaret is mostly calling out to Michael and repeating how much she does not like the place but otherwise seems to be a woman of very limited vocabulary. Repetition is a very common theme in the movie. The characters will repeat the same sentences over and over. When they have been over the same ground three or four times, they may move on to something new. I suppose it is a way to save on script.


Master is supposed to be scary, but he mostly looks confused. His super-scary dog is actually looking rather sweet and well-behaved and I am no expert on dogs. He also has some trouble asserting himself over the “slave” women of his sect who seem to drive him to frustration. Speaking of which, we get a scene where the women are “killing” Torgo by applying gentle hand slaps to his face. So scary…


Besides all the repetitions the dialogue is a marvel. It is incredibly stupid and applied with the worst dubbing imaginable. That dubbing may be the funniest element of the entire movie. Combine that with a score that is misapplied and poorly chosen, and you got a sweet mix. I loved it when horrible Torgo starts fondling a frantic Margaret and the score shifts into bedchamber cozy mode.


Then there are all the smaller details: problematic editing, inconsistent cutting, gaping plot holes, unmotivated actions, weird lighting and so on. Basically every decision made on this movie was flawed.


The result is hilarious, especially as it is very clear this is meant as a serious horror movie. For fans of utter disastrous movies this is a gem and a must-see. I could definitely see this movie earning a spot on the List and I would prefer it any day to free-flying dicks.