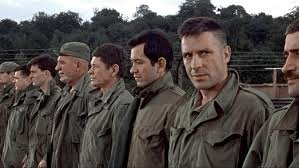 Off-List: The Dirty Dozen
For 1967 I will only be reviewing two off-List movies. This is partly because 1967 is such a strong year on the List, I think the largest number of movies for a year so far, and partly because I was not able to find any Danish movies from 1967 I wanted to see and much less write about.


The first of these two movies is “The Dirty Dozen”.


On the page from where I select my off-List movies “The Dirty Dozen” is listed as the most popular movie of 1967 and it was one of the highest grossing movies at the box office in 1967. It is easy to se why. Even now, 52 years down the line “the Dirty Dozen” remains a very watchable movie. Until near the end it keeps a tone and style that would make it very accessible even to a younger audience, especially if you do not think too much about what is going on. I saw it when I was very young and I have seen it numerous times since and it still kindles that boyish excitement of playing soldiers I remember from my childhood. It is tough, yeah, but not overly horrifying (for the first two hours) as if it is mostly a game.


The always great Lee Marvin is the tough as nails Major Reisman, the epitome of the American hero, a confident, resourceful no-nonsense cowboy who is at odds with his superiors but gets the job done. He has pissed off his superior so much that they are sending him on a suicide mission: Attack and kill German brass hanging out on a French chateau deep behind enemy lines prior to D-day. As a team he gets 12 convicts either with a death sentence or decade long imprisonment. These scumbags Reisman has to beat into shape and then take on the mission.


The kicker here is that team. This is a who-is-who in Hollywood: Charles Bronson, John Cassavetes, Telly Savalas, Donald Sutherland and so on, not to mention Ernest Borgnine as General Worden. A very competent and interesting ensemble. The usual danger is such ensemble movies is that each star needs enough space, but still drown out in the group. Here there are no such problems. All these characters fit into their roles perfectly, and none more than Donald Sutherland as the half-wit Pinkley. That man was born to play an idiot.


There are four stages to the movie. The introduction where we get to know the primary characters. The training, where all these men has to be turned from undisciplined convicts into a semblance of army material. The war game where in slapstick fashion the rabble kick the ass of the arrogant colonel Breed and finally the actual mission in France. It is a long movie, but never boring and the 143 minutes pass surprisingly fast.


There is an adventure to this movie that has been forgotten since, or rather, the recipe is now the stuff of cheap TV-series. An adventure for boys at all ages that makes it so fun to watch. Sometimes it is almost too much, like the laughing sequences that feels pretty dated, but in general it still works.


Not all is perfect though. The premise of the movie, that the army decides to send a bunch of unreliable felons on an important commando mission is laughable, but honestly several armies, not least the German army used convict units for particularly dirty jobs and Hollywood has since loved the general concept.


A second problem, which is actually worse when considering the appeal of this movie to young boys, is how the Germans and their women are herded into the basement and then blown up. The scene where they see the grenades dropped down on them and then get drenched in gasoline is reminiscent of the gas chambers in the death camps and not fun at all. Yeah, it was their mission, but it is also horrifying in the extreme.


Somehow my younger self must have forgotten about this, because I have fond memories of this movie and overall, I feel the same about it today.


Recommended for boys of all ages and probably for some girls too.