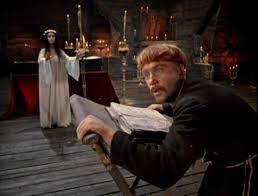 Vij
Before there was “Evil Dead – Army of Darkness” there was “Viy”.
I went into “Viy” completely blank. I had not even read the synopsis in the Book, so I had no idea what I was going into. Imagine my surprise when I realized this was a horror comedy in a similar vein as the “Evil Dead” movies, but Russian style.
We are in Russia, some time in the past. Three students at the priest college are on their way home from the seminary for break when they get lost in the night. They seek shelter at a farmstead whose sole inhabitant seems to be an old hag. She insists that the young men sleep separately and in the night,  she wants some cozy time with one of them, Khoma (Leonid Kuravlyov). He protests, but to no avail and soon she is sitting on his shoulders, using him as a flying horse. Yup, that is quite a sight!
Khoma is not too fond of this usage and as soon as he can get away with it, he beats up the old hag, who immediately turns into a pretty, young woman. Khoma flees.
Later, at the seminary, Khoma is called to visit a remote manor to pray for a young woman who is dying from a beating (!?). The girl has specifically named Khoma. Khoma is not excited to say the least, but he is left with no choice. The manor, or large farmstead really, seems to be functioning normally and Khoma is sent in to pray for the girl, who has now died, in the little church. This is a gloomy church and as soon as he starts praying the girl comes alive as some sort of ghoul and only his protective circle keeps her at bay. The second night is even worse, now she is flying in her coffin, and Khoma, understanding that this cannot end well only wants to escape. Unfortunately, there is no escape so instead he fortifies himself with a lot of vodka and goes for a third session.
Third night is the real nightmare. This time skeletons, zombies, ghouls and what-not come creeping out of the walls, including some monstrous creature called Viy. Will Khoma make it?
There are several things to note here. First of all, this movie plays for both horror and comedy. Khoma is a total antihero. He is a bit of a coward, looks and sounds a bit goofy and is not smart enough to get out of his trouble. They call him “Philosopher”, but he is as totally down to Earth as the farmers. This makes him a very unlikely hero and therefore funny.
The horror part comes from some very impressive stop motion animation that given its age and origin took me by surprise. Even by todays standard the monsters are decently effective, and the ending is not exactly what you may have expected. There is also an unexplained element concerning the manor and the people there. What is really happening and what do they know? We are never told and while this is at first a bit annoying, in retrospect I think it adds a dimension of mystery to the story.
Then of course, this is a Russian movie. This means that in some ways it looks amateurish compared to Hollywood counterparts (though at this time, horror movies in the West was also low-budget B affairs) and the humor is, well, Russian. Humor translates poorly, but even I got enough of it that I found it funny. I am quite certain that the copious amounts of vodka being drunk would be something a Russian audience would relate to and how vodka will give you enough stupid bravery to undertake ridiculously dangerous tasks.
I was pleasantly surprised by this movie, mostly, I think, because I did not expect anything from it. It is fun and entertaining and does not pretend to be more than it is and that is good enough for me.