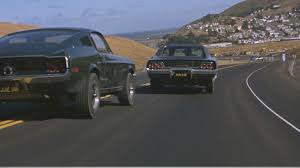 
The first off-list movie of 1968 is “Bullitt”, one of the most successful movies that year that did not find a place on the List.

You cannot accuse “Bullitt” for having a superior plot or an elegant script. In fact, the plot is both thin and confusing with loose ends that you just should not think too much about. The dialogue is minimal, at least when it comes to lead Steve McQueen, who apparently preferred everybody else to do the lines.

What “Bullitt” has is style, ambience, coolness and the greatest car chase in movie history up to this point.

Lieutenant Frank Bullitt (McQueen) is handpicked by Senator Walter Chalmers (Robert Vaughn) to babysit on his star witness against the Chicago mob, a defector called Ross, whom Chalmers has installed in a shabby room in San Francisco. Bullitt is quiet but effective, but two assassins still manages to gain access to the room and mortally wound Ross and the policeman on duty. Now Bullitt is hunting the assassins with a pissed off Chalmers breathing down his neck.

Never mind that we never learn who leaked his whereabouts or why Chalmers was protecting the wrong guy while the real Ross was trying to make his escape to Europe. This movie is about following Bullitt around in San Francisco to über-cool jazz music, hanging out with his girlfriend, being the shabby, but cool policeman and driving his Ford Mustang with a lot more horsepower than a policeman normally needs. This however comes in handy when he manages to lure the assassins out and chase them in a phenomenal car chase through the iconic San Francisco streets and then the back country. When you watch a car chase down those streets with the cars jumping off the cross-street plateaus, this is the movie it all comes from. There is not a lot of shooting or trashing cars, just high-speed technical driving with overpowered engines. I am not much for car chases, but this was exhilarating.

I am not certain the lone police officer fighting off superiors to one side and criminals to the other trope comes from this movie. Probably not. But this movie was definitely paving the way for hundreds of movies and tv-series with that theme, from Dirty Harry to Beverly Hills Cop and in that sense the influence of “Bullitt” cannot be exaggerated. A series like “Streets of San Francisco” comes to mind as a direct spin-off.

Steve McQueen is a revered actor and no doubt this movie was a lovechild of his. He does have a gritty coolness to him, but somehow, I have never truly warmed up to him. Sure, he is okay here and he does the job in a movie where not all the actors stood out that well. In my book though it is Robert Vaughn who stands out as a menacing character. He does that so well that I half expected him to be the villain behind all the action and, well, he might actually be, the movie is rather unclear on that point.

I do recommend this movie. It is fun to watch and the soundtrack is pure bliss. Watch it for the style and the car chase and with those expectations you will not be let down.
Posted by TSorensen at 22:35