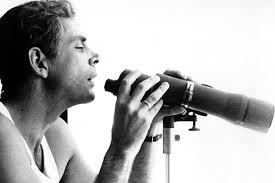 Minder fra underudviklingen
“Memorias del Subdesarrollo” (Memories of Underdevelopment) is a very difficult movie to describe, mostly because I still have not entirely found out what the point of the movie is. That is not necessarily a bad thing, it is an interesting movie to watch, but I am still contemplating what it is I have been watching.


Central to the movie is Sergio (Sergio Corrieri), a 38-year-old business man turned writer. When the revolutionaries took control in Cuba his wife and friends went to America, but Sergio for some reason stayed in Havana. I am not entirely certain why and I get the feeling that neither is he. Now alone he pursues a bohemian life, tries to write something, lives off the rent and spends a lot of time thinking about women and Cuba. Cuban women. Politics and underdevelopment. Underdevelopment women…


These are parallel tracks that mingle with each other, always with Sergio as narrator. Sometimes arrogant, commenting from an aloof position, even physically from his penthouse apartment, sometime more sympathetic in attempts to actually understand women and his country. Is he contributing in either area or is he just a passive observer, a tourist?


I feel the movie tries to tell the story of Cuba after the revolution with the Bay of Pigs fiasco and the missile crisis and in between the struggle of this new system, but from his point of with the portrait becoming detached and less patriotic than would have been expected, as if he is not real Cuban.


There is also this strange fascination with underdevelopment as if Cuba is an infirm and retarded patient, an inherent state that haunts the country. To me though, it is a way for Sergio to distance himself from the world around him, allowing him to be cynical.


Sergio’s relation to women is entirely parallel to this. He finds Elena (Daisy Granados), a young and naïve girl, that he feels vastly superior to. He tries to school her and model her into something “better”. This she resists and when he realizes that he is not getting anywhere with her he ditches he. She is hopeless. To the underdeveloped there is no progress. In the case of Elena there is the backlash that he gets charged with rape and ruin of a minor, which is also how the country reacts to him.


So, I guess this is the point, somewhere in those relations.


Technically the movie consists of documentary clips and fiction. There is no clear chronology and a lot of jumps and monologues. This ensures that the movie is never boring, but it can also get confusing to be without a clear narrative.


I would not say that the topics were super interesting. It gets very academic and theoretical at times as communist dialectic is an odd and confusing set of arguments, but something about the scenery and the filming kept me interested throughout and I think I got a lot more out of it than I honestly thought I would.


I am not sure “Memories of Underdevelopment” is for everybody and it takes some time to settle, but I am still glad to have watched it.