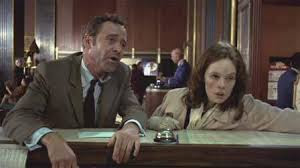 Off-List: The Out-of-Towners
Today’s update on the Corona situation here is that life goes on much the same as in the past weeks. We have that strange situation that apparently too few are getting the virus. The hospitals are getting fewer patients, the numbers have been dropping all week, and with this pace we will not only have spare capacity, it will take years to get through the epidemic. So, now the message is that some of the restrictions will be lifted, carefully, after Easter.  Let’s see how that turns out…


Today’s movie is the third off-List movie for 1970. I picked “The Out-of-Towners” mostly based on its reputation as a classic comedy and something to lift the spirits in these Corona times. I never saw it before, not even the remake, so I went in fairly blank.


“The Out-of-Towners” does what it is supposed to do fairly well, I suppose. The problem is more with me than with the movie. There is a certain class of comedies where everything has to go wrong for the protagonists. The worse, the better. If their lives and their relationships fall completely apart it is hilariously fun. Only, I don’t think these sorts of disasters are so funny. Well, sometimes, I suppose, but mostly not. “The Out-of-Towners”‘s comedy is entirely based on that Gwen and George Kellerman (Sandy Dennis and Jack Lemmon) have a miserable time visiting New York. Guess where that leaves me.


George has been invited for an interview in New York for a big promotion in the company for which he works. Bringing the wife along to New York he figures he can get a trip out of it, staying at the Waldorf-Astoria and eating at fancy restaurants. Unfortunately for Jack and Gwen thing does not go as planned. Due to fog in New York the plane circles for hours over New York and finally head off to Boston. The luggage is lost, they almost miss the last train to New York, there is no food left after queuing for hours and when they finally arrive in the middle of the night there is a taxi strike. And it rains. This is just the beginning and it goes pretty much downhill from there.


George is a manic and choleric type of guy. He does not put up with anything, put picks up a fight if he cannot get what he wants. Every time he hits a wall, which is about every five minutes, he will shout at the people he thinks are to blame and take down their names for later prosecution. This is a very long list of names. When he cannot take it out on anybody else, he takes it out on his wife. He is therefore a rather unpleasant guy, not unlike Donald Duck when he gets upset.


So, I am torn between feeling miserable for all their tough luck and feeling Jack deserves this for his annoying personality. As a result, this felt more like an ordeal than fun getting through the movie, which is really a shame. I am quite certain most people will find more enjoyment watching this than I did.


Checking the details of the movie on Wikipedia I noticed an astonishing detail. At one point, Jack Lemmon is standing upon a manhole cover when they hear a strange sound. Stepping aside the manhole blows up in an explosion and the manhole cover lands just centimeters from Jack Lemmon. This explosion was real, Lemmon could have been killed. Damn.


Anyway, the lesson from this movie must be that you should not refuse your meal on a plane. You don’t know when you will get one again.