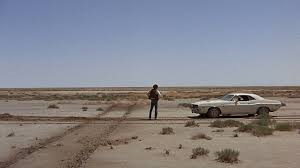 Off-List: Vanishing Point
After a lackluster start on 1971 it is time for the first of my three off-List movies.


When I did some research on the year, I found that all the movies I really wanted to watch were already on the List. That opens the door for movies that merely sounds interesting with the risk of course that it is utter junk. “Vanishing Point” was such an obscure movie with an interesting premise that caught my attention. Fortunately, as it turned out, it did deliver.


Road racing movies were popular in the seventies and into the early eighties. In these movies people were driving very fast on the highways and the highway patrols were the enemies. Exactly where this started, I do not know but I would not be surprised if “Vanishing Point” was one of the first movies in this genre. It certainly sticks to many of the themes of this genre.


Kowalski (Barry Newman) must deliver a car from Denver to San Francisco. For reasons not elaborated on Kowalski wants to deliver the car much earlier than required, forcing him to drive very fast and practically non-stop. The police soon want to pull him over and when he refuses the hunt starts. Soon Kowalski is the freedom loving cowboy insisting on his right to drive fast, promoted by a radio host Super Soul (Cleavon Little) who is very well informed (tapping into the police radio frequency).


Early in the movie I was wondering if this was really the story and frankly “Vanishing Point” lost a few points right there. It is to me a weird idea that driving very fast on the highway is a right or an applaudable expression of freedom. There are enough assholes risking other peoples lives by their insane driving.


As the movie progressed however, I realized that there were layers beneath this superficial story. From the talk of the police people it will appear that Kowalski actually has not broken any laws, not even that of speeding. I had no idea there was no speeding limit on these roads back then, but there your go. Kowalski’s offense is that he refuses to respect the authority of the highway patrols and that pisses them off. Now it is no longer the right to drive fast, but a rebellion against the authorities, and that fits a lot better to the hero picture painted by Super Soul, himself a minority in what appears to be a very white and conservative Western setting. Kowalski also meets a number of anti-authoritarian people on his way, hermits, religious groups, other racers, who are sympathetic to him.


But it goes deeper still. En route we get a number of flashbacks that help tell the backstory of Kowalski, though none of them are conclusive. We learn that he came back from the Vietnam War with distinction and was a police officer. From there he was dishonorably discharged, though we learn that as a police officer he was opposed to other police officers abusing their power. Something that resonates with the world of today. Kowalski’s girlfriend or wife died in a surfing accident and in the years since Kowalski has been a racecar driver. Not the best but completely fearless.


This is not spelled out, and that I love about those flashbacks, but it seems to me since losing wife and job Kowalski has not cared about his life but rather challenged death, pushing the envelope in the hope of some redemption. This fits with the ending, which otherwise may be quite shocking. Kowalski is not a cowboy fighting the authorities, he is a man with a death-wish looking for that vanishing point where it all ends.


I did not see it coming, but this is a far more interesting and complex movie than it appears to be and one I am happy to have picked. It is also a far more worthy entry to the List than what I have watched so far.
Posted by TSorensen at 23:15