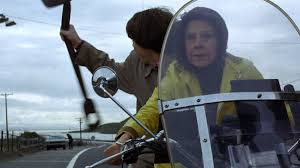 
I cannot say I was looking forward to watch “Harold and Maude”. A story about a teenage boy and an old woman having an intimate relationship sounded… very social realistic. Something about the elder person helping the young one getting through puberty or something like that. Anyway, a long-groaner. But that was not what this movie was at all. Instead it was one of funniest and most endearing movies I have watched in a long time. A truly positive surprise.

Harold (Bud Cort) is a young man, my guess around 16 or 17 years old, who is not happy. He lives with his rich mother in her huge mansion and she is clearly busy running his life but without actually listening to him. His hobbies are to stage pretend suicides and to go to funerals. It sounds crazy, but those suicides are both spectacular and hilarious. Clearly Harold has a thing with death and although a lot of it has to do with getting some real attention from his mother, it is also a longing to escape the stranglehold of his existence.

At the funerals Harold attend another guest keeps popping up. This is an elderly lady, Maude (Ruth Gordon), who is fascinated with death, but for a different reason than Harold. Maude is an anarchist who lives life to the fullest and does exactly what she pleases. Her interest in funerals is part of her big wheel philosophy and because she is planning her own end, to go when she is still able to live her life as she pleases. Harold and Maude hook up and become best friends.

Did I mention that this movie is hilariously funny? Maude as an anarchist is completely out of control. Taking cars if she needs them, creating strange art, gate crashing and doing everything a sweet old lady is not supposed to do. For Harold this is freedom and for me it was a hoot. The scene where Maude steals a tree and a car to drive it into the forest and on the way evades a highway trooper only to end up stealing his motorbike is just priceless.

Harold’s mother (Vivian Pickles) is convinced that what Harold needs is a wife and so she looks for candidates, of course without consulting Harold. The prospects are all ideal women in her eyes, meaning boring and respectable, and Harold is very good at scaring them away with a gory display. Then she decides that the army is the thing so she sends Harold to his officer of an uncle. This is trickier to get out of but with the help of Maude they put up a very effective show for the uncle.

Throughout there is this perfect blend of lightness and depth that makes it both interesting and very easy to watch. The heart of the movie is of course the relationship between Harold and Maude and how each of them is exactly what the other one needs and that is sweet. We learn that beneath the reckless surface there is a serious backdrop, a dedication to life born out of her past as a holocaust survivor and it is from this dedication that Harold finds that energy and that direction he has so desperately been missing.

A lot has been made of this being a sexual relationship with a huge age gap, but maybe I have become inured from watching weird British documentaries because this did not trouble me at all. Instead I saw it simply as two people becoming as close as it is possible to get. In fact, listening to the priest raving on about the grossness of such a relationship was a hoot in itself.

No, this was a beautiful movie and a hilariously funny one and a big recommendation from me.
Posted by TSorensen at 23:31