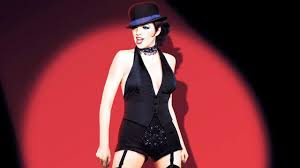 Back in high school our school was once visited by a theater ensemble, doing songs from “Cabaret”. That particular day our class was sitting on the front row and when the painted host sings the famous “Wilkommen” song he picks my lap to sit on. I do not think I will ever forget that song.

“Cabaret” was one of the big movies in 1972. It won eight Oscars including Best Director (Bob Fosse), Best Actress (Liza Minelli) and best Supporting Actor (Joel Grey). In a decade with very few musicals, the Academy certainly embraced this one.

“Cabaret” certainly does a lot of things right. Rather than the typical filmed theater with dancing cowboys or people spontaneously breaking into song, the music is focused on shows at the decadent Kit Kat Club and these intermezzos are neither filler nor focus but a counterpoint to the action off the stage. This is, at least nominally, my kind of musical.

This is Berlin in the very early thirties. It is before the Nazis took power, but there is an evil foreboding that something bad is going to happen. Partly from the omnipresent Nazi hoodlums and partly from the abandon with which the clientele at the Kit Kat Club embrace the decadence. The Master of Ceremonies at the club (the demonically painted Joel Grey) is the devil, preparing hell while serving bliss.

On this dramatic backdrop we a served an almost boring story of Sally Bowles (Liza Minelli) and Brian Robert (Michael York), two foreigners trying to get along in this Berlin before the storm. American Sally is this manic pixie character with a dream of being a famous actor (think Louise Brooks, famous at that time in Germany for Pandora’s Box), yet stuck with a job as singer at the Kit Kat Club. Brian is the new arrival, a British aspiring writer who teaches English and is (almost openly) gay. Their story is mostly of them being friends, both of them falling in love with a rich baron and Sally getting pregnant. If this sound a bit on the dull side then I got it right. I had a hard time working out what the point with their story was. It is more of a portrait of two odd characters than anything else. Liza Minelli may have inherited her singing voice from her mother, but her manic character in this story is one I quickly got tired of. There is a desperation to her mania, which makes her a sad character despite her energy, but it does prevent me from wanting to slap some sense into her.

The gay Brian is the more interesting character, but his role is more to support Liza Minnelli than to develop a character of his own. His voice though evokes that of Roger Livesey and that is a voice I can listen to for hours without tiring.

The most interesting element to the Sally and Brian story is their encounters with the world of Berlin in 31. The political violence, the poverty, the decadence and the growing antisemitism. The feeling that it is five minutes to twelve is one of the strongest assets of the movie.

A musical however should be measured by the music and that part of it is outstanding. Whenever we return to the Kit Kat Club I would wake up from my dose and enjoy the demonic spectacle there. This is excellent music and a fascinating show. An ugly one, but one that I could feel deep inside, especially when the Master of Ceremonies would smile at the camera.

A high-tension setting, a great show, but a dull story, “Cabaret” is not perfect and it ended up feeling long, but the spectacle is remarkable and it remains a must-see.