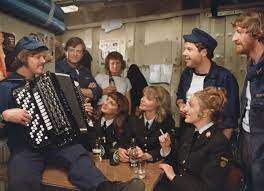 The third off-List movie for 1977 and the specific Danish contribution is called “Piger til søs” (which may be called “Girls at Sea” in English, though I am not quite certain there is an English title for it…). This movie belongs to a category folksy comedy that were immensely popular in Denmark in the sixties and seventies. They are usually not particularly great and my reason for including one of those here is partly because this was a thin year (it was one of these comedies or a brutal social realistic movie on alcoholism) and partly because I grew up on this stuff and therefore suppose I have a soft spot for them.

“Piger til søs” is the third installment of a spin-off series to a popular series in the sixties (puh…) about dudes in the army (Soldaterkammerater). The sort of movie that makes you fervently hope these are not the guys who are supposed to protect you from an invading army (think “Stripes”). In the seventies the series was continued with three girls joining the force and in this third movie ot theirs, you guessed right, the three girls are on a naval ship.

The three constables, Vibeke “Vibsen” (Helle Merete Sørensen), Magda (Ulla Jessen) and Irmgard (Marianne Tønsberg) are taking a signaling course at a naval base and get invited by some sailors to visit them on their ship, the “Falster”. They are not really supposed to be there and suddenly the ship departs for a surprise exercise. The sailors will get in trouble if the girls are found and the girls are effectively deserting their post, so, yeah, they are all in trouble. Half the movie is the desperate attempt by the sailors to hide the girls from the officers.

Of course, there are some romantic entanglements. Magda is hitting on all the boys and half of them are hitting on her. Vibsen finds out that her boyfriend, Harry (Finn Nielsen), is actually a lieutenant on “Falster”, while he does not even know she is in the army, and Irmgard is freaking out over leaving her toddler at home with her husband.

As it is getting increasingly obvious that something is up, the firebrand captain of the ship (Karl Stegger with awesome sideburns) is about to explode.

Everything in these movies plays out for comedic effect so we do not expect a lot of realism here and we know up front that everything will end well, so the level of suspense here is moderate at best. It is also a family movie, so the naughty jokes of the sailors are rather toothless and certainly less juicy than their posters by the bunks. Still, they do manage to conjure up a merry party and a silly cat and mouse game to hide the stowaways. Of course, there are a few songs, some dancing and wisecracking to get in the mood. I do remember it as being funnier, but I was very young when I watched this back in the day and my level of reference was a tad less jaded than today.

The one actor I always love to watch in these old movies is Karl Stegger. It actually does not matter which movie he appears in, he makes it worth watching just for being there and in “Piger til søs” he is allowed to go all out as a grumpy old bully. Think of him as a Guy Kibbee sort of character.

To pick the last of a series rather than the first or the best is probably a bit odd, but at least I have included an installment to represent the series. In a decade where the military, whether army or navy, was somewhat frowned upon, I think that this one make both look quite palatable and that is worth something. You may want to start this series somewhere else, but you could also pick a worse place to sample this franchise.