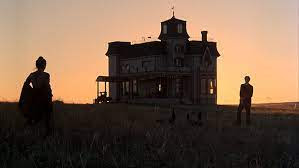 “Days of Heaven” is the second movie on the List by Terrence Malick and it seems to me that he got stuck with the same themes. A bit like Hitchcock, telling the same story in different wrappings.

This time the young, lost couple is Bill (Richard Gere) and Abby (Brooke Adams), pretending to be siblings for convenience and with Bill’s sister Linda (Linda Manz) as a hanger-on and narrator. They escape Chicago around the time of World War I after Bill accidentally kills a foreman in a factory. Ending up in the Texas panhandle, they take jobs as seasonal farmhands.

The young owner of the farm, known only as “The Farmer” (Sam Shepard), is rumored to be sick and on the brink of death and since he clearly has taken a liking to Abby, Bill cooks up the plan that Abby will marry him and when he soon will die, she will inherit the farm and all its wealth.

Only, the rumor was greatly exaggerated, and The Farmer is feeling fine. He is just a bit weirded out that his new wife is a little too familiar with her “brother”. The period of bliss is broken when the farm is hit by locusts and shit hits the fan in every way possible.

This is again the story of young people of dubious morals who seeks freedom and wealth, but are finally caught by a civilization who does not accept that they can do whatever they want. Mainly because their means are highly illegal.

I know there is a certain appeal to those stories, but they rarely sit well with me, usually because the characters come off as stupid and selfish. “Days of Heaven” is no different. It also adds a another very common theme that always sat poorly with me, that of the triangle drama. I cannot explain it, but I have always found triangles to be worse than gore and violence, making it particularly hard for me to watch. Childish perhaps, but there I am.

“Days of Heaven” is, according to both the Book and Wikipedia, one of the most critically acclaimed movies in cinema history, and it seems this acclaim is mainly directed towards the photography. This is also by far the most attractive element of this movie. Especially the landscape shots are a wonder and in its meditative slowness, the camera will often dwell on a particularly spectacular view, whether it is the colors or the distant horizon that is in focus. I find it hard though to extend this acclaim to the rest of the movie. The same meditative slowness made it incredibly difficult for me to stay focused on the story and it never managed to suck me in. Frankly, it is a boring movie, with the drama coming from elements I care nothing about.

This is also the first movie on the List with Richard Gere. I have a longstanding and probably irrational antipathy against Richard Gere, so that does not exactly help.

This would likely be a very polarizing movie and I may be terribly biased, but from my particular standpoint, this is not a recommendation.