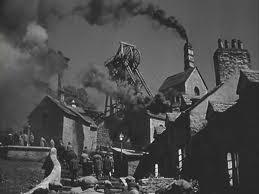 Grøn Var Min Barndoms Dal
At the Academy Awards in 1942 the big winner was John Fords “How Green was my Valley” including the big one for Best Picture. Considering 1941 was a big year with films like “The Maltese Falcon”, the commonly recognized founder of the film noir genre and a blockbuster on its own, and “Citizen Kane”, the founder of almost anything else in cinema, “How Green was my Valley” must be absolutely awesome.


I know, going into a film with high expectations is never a good idea so I supposed “HGwmV” was doomed from the beginning.


Honestly I do not know where those Oscars came from. At this point I am operating with two theories:


1.       The Academy was composed of nostalgic old farts dreaming themselves back to those glorious days in the coal mines of Southern Wales and cry with blissful longing for the whap of the teachers stick.


2.       The memory of “Gone with the Wind” was still fresh with them and this epic story of a world of yesteryear torn apart reminded them of it.


My own impression of “HGwmV” is that it feels schizophrenic. It is told with a nostalgic longing for things past, painting the images with a rosy hue so that you feel that the narrator is almost breaking his voice from all those golden memories. But what are those memories?


Ah, yes, we got the loving but strict father. Yes, he was oh so wonderfully strict, but you have to be with many children in those old days. Well, as the film progresses he is softening and we do get to see a heart of gold, but at that point the sons are either gone or killed and the daughter married off against her will.


Oh, and those glorious coal mines. Now that was good, solid work for real men. Wonderful coal dust to soften your lungs and good workout to strengthen a boy. Well, from time to time people would die down there in the pits and them coal slags were probably not too healthy either, but what job is really safe? Oh, and job security was maybe not the strong side either not to speak of environmental impact on those picturesque valleys. But come on, those coal mines were great and men were singing when they came from work after a day of labor in the dark, wet mines.


School was also a golden memory. What a great experience to get mocked by both teacher and students, but then a good boy can learn boxing and when you knock somebody down you have made yourself a name in the world. And that whacking of the teachers stick, well he seemed to get a kick out of it so it was good for something and then you could wear your stripes with pride. Not like lax schools today, oh no, we looong for them good ol’ days.


One thing we definitely remember with a nostalgic pang was the community feeling in the village. All that singing and drinking beer (not too much) was great. Everyone was welcome. And a bit of fighting, branding or gossiping was not too bad, no? So, a few ended up as outcasts and that it happened to be those most worthy in the community, well was just too bad, guess they had it coming, breaking the rules and all.


To the defense of the story we can choose to see it as an “innocence lost” storyline, where everything is happy happy (sort of) in the beginning but all those bad things gradually destroys everything good about life in the valley till there is nothing left but to leave. I suppose that is an okay, but rather depressive storyline.


My experience watching it was that of a bumpy ride through the lives of the Morgans, the host family of the film. There are ups and downs, though mostly downs and it does not feel as if the story is going anywhere. With half an hour to go I was wondering how they were going to end this one because I did not really see a climactic resolution on the horizon. Without revealing too much I can say that it was a bit of a fizzle as people either die or leave, more or less as they had throughout the picture.


For the film an entire village had been built in California to mimic a Welch mining village since they could not use the real thing in Wales due to the war. I have no complaints about that, it looks real enough to me and I guess that is an achievement. The odd mix of dialects however kept grating on me. I think the only thing they had in common was being rural.


The Book describes “HGwmV” as a Kleenex film, but it did not really work on me. I guess I do not miss my old coal mine so badly and a scattered family, well, you should meet mine.
Posted by TSorensen at 20:52