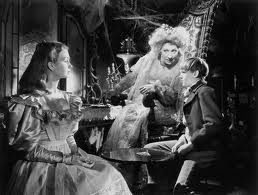 Store Forventninger
I have in the past made a point of avoiding Dickens. Not because I have anything particular against him, but I associate Dickens with that image of Oliver Twist begging food and if there is something I cannot tolerate it is abuse of children. It is deeply unfair, I know, but it explains my utter ignorance on anything Dickens.

Of “Great Expectations” I knew practically nothing, but qua above I felt some apprehension when this film showed up on the list. My concerns were of course baseless as I soon found out and a very clear hint should have been that this is a David Lean movie. His “Brief Encounter” was an astonishingly deft and sensitive film and while “Great Expectations” never reaches those heights it does bear the mark of a master.

It did start on the wrong foot for me given my above concerns though. Young Pip (Anthony Wager as the boy, John Mills as the adult), only a child, is an orphan visiting his parents grave on a foggy and desolate cemetery when he is caught by a convict on the run (Finlay Currie). The convict wants food and threatens Pip with horrible things if he does not provide. Pips lives with his sister (Freda Jackson) and her husband Joe (Bernard Miles ) and while Joe is a truly nice guy, the sister is not. Pip is therefore in a bad place sandwiched as he is between the terrifying convict and the brutal sister. Of course this is excellent for creating tension and sympathy for Pip, but I just get confirmed that this is another film about child abuse. Poor Pip.

The crisis passes and without getting too entangled in the narrative Pip’s life takes a turn when he is invited into the mausoleum of a house belonging to the rich and eccentric Miss Havisham (Martita Hunt). I never really figured out why she wants him there and I suppose it is important in a sense. What I do know is that Miss Havisham also holds a young girl of Pip’s age, Estella (Jean Simmons as the girl, Valerie Hobson as the adult) and that Pip takes a liking to this strangely aloof girl.

This house and these people add no small amount of surrealism to the film. They are really weird. Miss Havisham whose fiancé never showed up at the wedding still wears her wedding dress many years later and the hall of the feast has never been cleared. The wedding cake in particular looks disgusting.

Pip wows to become a gentleman and miraculously that actually happens when an unnamed benefactor sponsors his training and livelihood. Pip is off to London and is transformed from blacksmith apprentice to (useless) gentleman. A gentleman apparently does not have to work but has to learn certain stills such as dancing, eating and fencing and of course talk with that telltale British combination of reserve and politeness.

The climax comes when Pip’s benefactor is revealed and Pip’s life again is turned upside down, but the juicy details shall not be revealed here.

The movie has an interesting storyline with some very odd and curious twists that keep turning Pip’s life around, events that Pip largely have no influence on. He is adrift on this sea of fate. Although the threads ties up in the end I am not entirely sure that they do so satisfactorily. There is something missing there, but that could very well be the book itself. Will they head off to Australia were wealth awaits? And what exactly brings them together in the end besides both being alone? I am not sure it matters because this is a story where the journey is more important and the target.

Whereas Pip as a character is a bit bland he is surrounded by funky characters. The Lawyer Jaggers (Francis L. Sullivan) and his crew of oddball assistants is almost a parody and all through his life Pip meets characters more interesting or at least weirder than himself.

I have been thinking long and deep thoughts on the message of “Great Expectations” and I am still not sure I have arrived at any conclusion. Where “Oliver Twist” is supposed to be a social critique “Great Expectation” feels more like a parody on society and fate. Something about that class is not a skill but a fortune and that true value may come from unexpected corners. Certainly the story makes mockery of the entire gentleman business. I am not entirely happy with that analysis, but it will have to do for now.

So, what is David Leans contribution to all this? Well, I believe he has made a story which without its colorful characters easily could have become dull and heavy, to a very entertaining one to watch. The sets are detailed, interesting and seem very representative of the age (something that landed it two Academy Awards), but Leans real achievement is the performance he gets out of his cast. Without them shining the film would not be half as good.