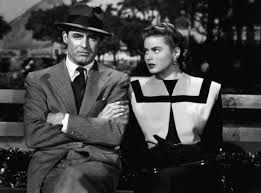 Berygtet
It was with some anticipation that I went into ”Notorious”. Hitchcock is, well, Hitchcock and as far as I can tell “Notorious” has a bit of a reputation. Besides the acclaim, a movie that features Cary Grant, Ingrid Bergman and Claude Rains cannot help being subject to hype.

High expectations are disadvantageous. This is not a bad movie, not at all, but I am not entirely thrilled by it either.

T.R. Devlin (Cary Grant) is an agent of sorts for the US government sent out to recruit the estranged daughter, Alicia Hüberman (Ingrid Bergman), of a Nazi traitor for a delicate job. Apparently the Hübermans is a German immigrant family in the States who belonged to a subversive circle of German who in exile had decided to follow Die Vaterland. I suppose most countries at war, cold or hot, are obsessing about a fifth column enemy working from within. For a brief time during and after the war those ghosts were Nazis. Later they were Commies.

In any case Miss Hüberman loves her new country and has no sympathy for her father, but she is intimately familiar with this circle of Nazis so Devlin’s agency can use her as a mole.

Ingrid Bergman is excellent as the careless, even nihilistic, party girl and it actually took me a little while to recognize her. I never saw Bergman this rowdy and flamboyant before and that was a revelation. Unfortunately she deflates as she is recruited and the entire film seems a deroute for her. As she and Devlin goes to Rio for the job she tries to replace her passion for party with passion for Devlin, but Grant is strangely wooden. While I certainly had no problem recognizing him, his profile is unmistakable, he seemed only a shadow of himself. He is supposed to be a gentleman agent, a proto James Bond, but he is sparse and dry in his charm, possibly to act up to the professional agent, but it looks more like restraint than toughness. Almost as if he has been ordered to tone Cary Grant way down. Hüberman seems to have agreed to the job out of love for Devlin, but Devlin grows more and more distant and her passion dims as well.

Along on this mission is Captain Paul Prescott (Louis Calhern) a jolly optimist who is in charge of the mission but looks more like he is on vacation in Brazil and certainly seems ignorant to what is going on between Hüberman and Devlin. His instructions are that Hüberman has to ingratiate herself on a certain Alexander Sebastian (Claude Rains) who is a local nazi-in-exile notoriety. These Nazis are up to something and if Hüberman can get a foot inside maybe they can find out what it is.

It works. Sebastian is flattered by Hüberman’s interest in him and immediately lets her in. He even proposes to her despite advice from his evil mother and Hüberman accepts.

Here is the strange thing and the heart of my troubles with this film. Devlin is just about the most unprofessional secret agent I ever knew. He gets emotionally involved with Hüberman. Well, you can say that it helps recruiting her, but once in Brazil his emotions keep interfering. Although he himself brought her in and in a very literal sense pushed her into the arms of Sebastian he gets jealous. Come on! It’s a job and YOU set it up! Instead of protecting her and supporting her most dangerous position he wanders off to sulk and seems genuinely more interested in whether Hüberman loves Sebastian. He is jealous on the mark, for Heaven’s sake!

For Hüberman it is a disaster. She is very literally in the lion’s den and not by her own design. The Nazi’s are almost faceless, menacing entities dressed up in suits and good manners and in their company you feel that violence and sudden death can break out without warning. Her lifeline is Devlin and he abandons her because she is doing her job.

This sort of unprofessional behavior annoys me, but I realize it is a general weakness in Hitchcock’s films. He may be using it as a device to create tension or simply thought that the romantic angle is a must. In “Shadow of a Doubt” it was kept at a level where it had minimum impact on the central plot and tension building, but because Hüberman’s precarious situation to some extent is a result of this childish behavior it bothers me a great deal.

Of course Devlin overcomes this spell of idiocy and shows up at the right times to do his job, he is after all the hero of the film, but it is Claude Rain’s Sebastian who ends up stealing the picture. Sebastian is a grandfatherly character who seems almost the unwilling bad guy. He is caught between his position in his social circle, his dominating mother and the terror of the Nazi group. How much he is really involved in their cause is always unclear. The group meets at his place and stores their secret doomsday weapon in his basement, but he seems like a guy who would rather just be married to a young and pretty girl. When he finally turns on Hüberman it seems to be motivated by the emotional betrayal more than cruelty as such and in the end self-preservation seems to win over the cause. Claude Rains is a far more human villain than we are used to and in light of Devilin’s inexplicable childishness Sebastian almost looks like the better catch.

Despite this Rains never gets out of character. Sebastian may be complex, but he is the enemy and when he and his mother set out to destroy Hüberman they are scary. Claude Rains is definitely an actor I have come to respect.

“Notorious” of course has plenty of classic Hitchcock suspense. The champagne running out as a countdown to disaster, the claustrophobic Sebastian mansion, the hidden enemy. All this is what we love from Hitchcock. He also likes to scare the shit out of pretty blondes and Hüberman is getting her dose. As she gets more and more frantic I recognize Bergman from her other roles. This is something she does well and often, maybe too often. Somehow I liked her rowdy badass attitude in the beginning of the film better, but hey, if you are looking for a girl who can look troubled Ingrid Bergman is the girl you want.

“Notorious” is entertaining and full of suspense, but it is not Hitchcock’s finest. So far that title belongs to the outstanding “Shadow of a doubt”. This is also not Cary Grant’s finest hour. But then again, both of them made so many excellent films that I can forgive them this one. “Notorious” belongs to Ingrid Bergman and Claude Rains.