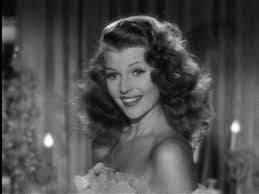 Gilda
I am not entirely sure what to think of Gilda. It leaves me rather confused, yet with a feeling that I have been distracted from the real idea of the movie. I will explain.

There are fundamentally two stories in “Gilda”. The first story, which is the one we plunge into right from the opening is that of Johnny Farrel (Glenn Ford), a gambler who, for reason he wants to keep hidden, has left America to show up in Buenos Aires. He is the man without a past. He is befriended (sort of) by a mysterious character named Ballin Mundson (George Macready). Ballin runs an (illegal) casino and hires Johnny as his assistant. However this is not the only operation Ballin runs. Apparently he is a bit of a character in the underworld of Buenos Aires, most notably the head of a resource (tungsten) cartel. Ballin has a strange relationship with Johnny. With the one hand he trusts him and with the other he seems to keep a dagger dribbling with suspicion pointed at him. His criminal activities seem to make him the bad guy and there is a crime/spy story here with Ballin and the police pitted against each other and Johnny in a limbo in between. This story however fizzles when Ballin fakes his own death to go on some planned, secret mission only to show up in the end.

The other story is a really weird love/hate story between Johnny and Gilda (Rita Hayworth), a mysterious woman that suddenly appears as Ballins new wife. She has as veiled a background as Johnny, but it is clear that they know each other. The next hour of the movie is essentially a dance of mutual torture between Johnny and Gilda with Ballin as the odd third player. Gilda and Johnny are at each other’s throat with a vengeance. Gilda provokes Johnny at every opportunity she gets while Johnny tries to keep her at an arms distance. Meanwhile Ballin seems to be wielding Gilda as a weapon against Johnny. He may have picked her up simply to have something on him, but on the other hand Ballin is also very protective of Gilda.

Halfway through this all changes when Ballin presumably dies. At that point Johnny assumes Ballins character, both in terms of his businesses and Gilda. Instead of pushing her away he does the opposite. He builds a prison for her, one she just cannot escape. They love each other and they hate each other and it consumes them both.

The second story is clearly more important than the first, but even the second one is obscure. We never find out why Gilda and Johnny are at each other’s throat, except that something clearly happened in the past. The role of Ballin is also rather obscure. To me he is like a demonic symbol of the fascist coldness Johnny is trying to assume in relation to Gilda and his fate at the end of the movie is like an externalization of the transformation Johnny and probably also Gilda must make to resolve their relationship.

But even that may be a distraction from the real item of this movie: Rita Hayworth. She is the centerpiece of this film that outshines everything else. Even if you are not entirely taken by her (Personally I prefer Lauren Bacall) she is set up here as the ultimate allure. Her entry in the movie says it all. That is probably the most in your face sultry entry of a femme fatale of the forties, maybe of all time. When she lifts her head, swings the hair back and look at Johnny you know where the cliché is coming from. This film is all about making Gilda a.k.a. Rita look as hot and desirable as it is human possible and a lot of the explanation for the rather illogical behavior of the men around her is depending on this effect. In short she drives men crazy and that brings us to the classic noir motive of the femme fatale. By all rights it should work here. Rita Hayworth is stunning no matter how you put it and she has sex appeal in spades. The problem is just that it is almost too obvious. This is Hayworth’s movie and we have to get the full dose including three musical pieces. There is no subtlety there. If she had been slightly less of a woman it would not have worked and even so she makes much of the story around her look like a distraction.

A lot of the noir elements work well. The seedy underworld. Mysterious people with hidden, unsavory agendas and beautiful women. We also have the steady and fatalistic deroute to disaster and certainly the flawed (anti)heroes. I certainly have no complaints with all that. George Macready is excellent and his Ballin Mundson is easily my favorite character. He is ice-cold and menacing, almost supernatural as a phantom of the opera residing above the casino. Also it is difficult for me to have a problem with Rita Hayworth. She does her best to be a beauty to die for and her songs are good. As soon as I heard “Put the blame on mame” something clicked and this song fell into place.

The problem with the movie is just that the story is a mess. Even if the criminal story is a MacGuffin, that still leaves us with Johnny and Gilda´s dysfunctional relationship. I have tried explaining the plot of this story element as Ballin being a vengeful part of Johnny’s subconsciousness. When he disappears Johnny takes on his personality and Johnny becomes Ballin only to take his body back in the end. But even that stretch seems a bit thin. Let me just admit that I am not entirely sure what this movie is about except showcasing Rita Hayworth. But that it also does very well.