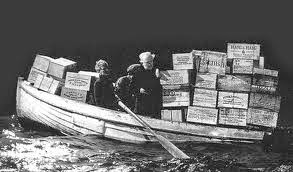 Masser af Whisky
It was an old joke on campus that the worst fate imaginable would be to run out of drink and as a consequence the effort to avoid such a fate could take hilarious proportions. This does not by any stretch mean that we were walking around in a perpetual stupor or that we were particularly alcoholized (at least not by Danish standards), but so goes the jargon on campus with the inherent exaggeration.

This ill fate befalls the community on the lone Scottish isle of Todday during the second world war in the movie “Whisky Galore!”. The island has dried up and no shipment of whisky is forthcoming. This, we learn, is a horrible state of affairs and seems to lead to lethargy and depression with almost everybody moaning over their deprivation.

This however is about to change. A ship carrying tons of export whisky for The States founders outside the island and the whisky is it seems up for the grabbing. This is a godsend for the islanders who scramble to secure as much whisky as they can before the ship goes down for good. Well, as it happens these God-fearing people need to take a break to uphold the shabat and then they move into action.

These islanders are a jovial and jolly lot and watching them having a great time and getting plastered would be entertaining all on its own. The comedy in this movie however come from one of the few who are NOT happy about the whisky. In fact he seems to be not happy about anything on this island. This is Captain Paul Waggett (Basil Radford), an Englishman stationed on the island to command the home guard and to a comical extend an absolute outsider. His view on the islanders is a blend of disdain and incomprehension and that of course means that he is fighting a permanent and losing battle against them.

What Waggett’s intent with the whisky is is not entirely clear except that he must prevent the islanders from getting access to it because in his bureaucratic mind that would be illegal and wrong.

That is the setup and then it is just to let this thing loose and see where it lands. It is truly funny. The clash between the stuffy Englishman and the cunning islanders is just classic. The theme has been repeated infinitely, but this is one of the better installments. The facial expressions of people like Joseph Macroon (Wylie Watson) or Old Hector (James Anderson) while suffering the withdrawal of abstinence and then the excitement and joy of this price is just priceless. Radford as Waggett is also absolutely excellent in his role as his face goes through the entire register from arrogance over confusion and disbelief to end in resignation. His character must also be the template for countless of British characters since.

Into this game of hide and seek two romantic stories are wedged in. George (Gordon Jackson), the local self-effacing school teacher, must face off his strictly Calvinistic mother before he can marry his Catriona (Gabrielle Blunt) and Sergeant Odd (Bruce Seton), another apparent outsider, must prove he is a true islander before he can marry Peggy (Joan Greenwood). As love stories go there is not much to it and they play out more for comedic effect and to describe the characters of the people on this island. The girls are also a lot more than just the love interest of the two men. Although they may not be as excited about the whisky as the men, they are in heart and soul islanders and especially Joan Greenwood is a delight to follow as she runs circles around Captain Waggett.

It is curious how a movie that clearly downplays the ill effects of alcohol and instead makes it a cultural centerpiece can come about in a period when alcohol is getting a lot of bad publicity and censoring is particularly fierce. Of course it makes sense that this is a British film where I assume the codes a more relaxed than Stateside, but it still takes some guts. Personally I do not mind at all, I find all these characters charming whether they are drinking or not, but for the director himself this must have been a challenge. Alexander Mackendrick was a Scottish-American Calvinist and apparently sympathized more with Waggett than the islanders. How such a person gets to direct such a film is beyond me and how he still succeeds at describing the islanders as lovable fools and Waggett as an idiot is just baffling. He must have tied a few knots on himself in the process.

As for my personal impression of the film this is clearly the best of the Ealing films I have seen so far. This being only the third (after “Kind Hearts and Coronets” and “Passport to Pimlico”) that does not really say very much, but as I did not dislike those other two that means that I really like this one. The Book say that it has not aged well and there I disagree. This film has in many ways aged better than most movies I have seen lately. Comedy is much harder to succeed at than most other genres. The same jokes are just not funny over sufficient time and space. But this was a movie that made me not just smile, but laugh out loud repeatedly. That makes it a job well done and clearly a movie I would not mind watching again.